Focusing our minds on Christ. . .studying His word, drawing tight into a relationship that is unbreakable. This is when His Spirit lives in our minds helping us keep our eyes focused only on Him. 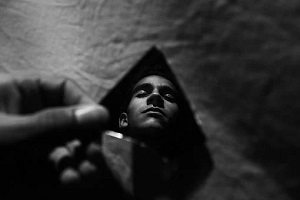 The rain pelted gently outside the window.

Flames danced wildly in the gas furnace, mesmerizing me with their magic spell. A few feet from the gas furnace lay a full-length mirror, beautifully reflecting the skipping flames.

“Trade places with me,” my fiancé said.

Feeling blissfully content, I resisted the urge to ask why.

“Look at the flames in the mirror.”

“Now look directly at the flames.”

Again, I did as he suggested. Only now, I saw what he saw.

As I looked at the flames, they appeared to dance in a random, unordered, and spontaneous way. Yet when seeing the flames in the reflection, I saw an ordered pattern. Two different pictures of the same thing.

Life’s situations are not always as they seem. After years of reflection, we can often see the pattern behind the “why” demanded in the rearview of life. God works on a beautifully ordered, perfect tapestry, yet we only see the haphazard, random strokes of thread on the backside.

Even Jesus, God’s Son, asked why He was forsaken by His Father as He hung upon the cross and died a cruel, torturous death.

God had no more forsaken His son on Calvary than when we, adopted sons and daughters in Christ, feel abandoned during our difficult seasons. God is working out bigger plans that require faith in what we cannot see and understand—plans to be revealed in God’s perfect timing.

As we can see the difference in an ordered pattern of reflection, we will grow in our Christian walk to know and trust the divine pattern God has ordained for our lives. The rearview is not meant to hold us captive from present and future opportunities. Yet reflecting on the past can reveal God’s omnipotent design toward a beautiful future.

Are you reflecting on where God wants to take you? 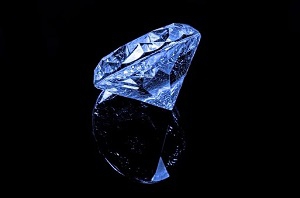 The diamonds were as beautiful as I remembered.

Thousands of years in the making, they sparkled beneath the soft glow of the jeweler’s lamp. The rings, bracelet, and brooch had all belonged to my parents, but I was thinking of selling them.

The appraiser mapped marks on a series of plots as he studied each gem’s unique characteristics. With squiggles covering the plots, I was confident my diamonds were as priceless as the people who had worn them.

But the diamonds weren’t perfect or priceless; they had flaws. Interior imperfections and exterior blemishes such as scratches, cracks, and nicks identified each diamond and also affected their ability to reflect light. These things diminished their clarity and value.

A grading system developed in the 1950s established four factors to describe and classify diamonds: clarity, cut, color, and Carat Weight. Following these GIA guidelines, each diamond’s plot pinpoints the exact location and nature of each characteristic and flaw.

As I studied the plots for each diamond, I imagined what a GIA plot of my life might look like. A chip of resentment here. A deep fissure of anger noted there. Surface scratches of pride and self-sufficiency. Nicks of selfishness throughout. A general cloud of apathy.

My imaginings humbled me and left me thankful that God doesn’t map by imperfections on a graph or identify me by my flaws. God recognizes my sin when He says He knows me intimately, meaning my innermost being and the thoughts and intentions of my heart.

But the story doesn’t end there. God reminds us He will forgive us and cleanse us from unrighteousness if we confess our sins. He will show us mercy and remember our sins and iniquities no more.

Our sin and flaws don’t diminish our value or God’s love for us. Unlike a diamond that is identified and valued by its flaws, God’s light and love shine through us with divine clarity that reveals we are reclaimed, restored, and redeemed. When God sees us through his lens of grace, he sees the righteousness of Christ—where flawed becomes flawless.

Have you let Christ redeem your flaws?

When the Mountains Fall into the Sea
View Full Devotion 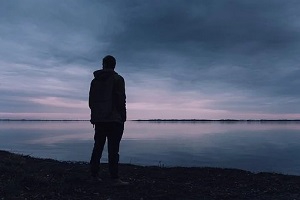 Many ways exist to communicate news these days. Sometimes, bad news seems to come at us nonstop. I once had a week like that. I turned off my cell phone to take a break, and my landline started ringing. I decided to watch television as an escape, but a breaking news report interrupted my favorite show.

Life has seasons. If we live long enough, we realize there are times of pure joy but also times when big things and small things all seem to go wrong.

Psalm 46 uses the illustration of the mountains being carried into the sea. The psalmist states that even if that happens “we will not fear.” How can anyone not fear if the mountains are falling into the sea? The little word “therefore” gives the answer. We do not have to fear, worry, or despair for one reason only: “God is our refuge and strength, a very present help in trouble.”

When things go wrong and life changes faster than we can process, one unchanging truth remains: God is our Rock. He will not change. He is strong and mighty and loves us more than we can imagine. He wants us to run to Him. He wants to be our refuge when the storms of life rage—to give us His strength when there is trouble. He is “very present” and wants to help.

Life is hard, and we don’t always know what the future holds. But we know God will always be there waiting for us. All we have to do is run to Him.

In the shelter of God’s presence, you are safe and secure. Count on that promise. 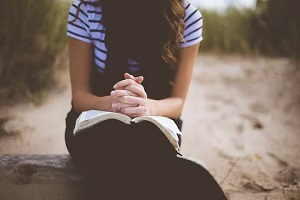 For years I prayed for my brother.

My brother was bitter and hated everything associated with God. After a heart attack, he needed emergency surgery, Because he chose not to communicate with family, none of us had the opportunity to make a mad-dash, last-ditch effort to talk to him about salvation. Unfortunately, he died during the operation. Nevertheless, all was not lost.

Judas introduced Jesus to an armed mob with a kiss. We see this as an act of betrayal, but since God is sovereign, He can use any circumstance to accomplish His purposes. I like to speculate that maybe someone in that armed mob had a sister, who for years had been praying for her brother to meet Jesus. Maybe that brother hated God and needed to see Jesus restore the ear of an enemy. Maybe Judas' kiss was God's mad-dash, last-ditch effort to show that brother who Jesus was.

Imagining that God would use Judas to point someone to Jesus might seem far-fetched, but God can introduce the lost to Christ in any way He chooses. As for my brother, I found out later that before he was wheeled into surgery, a Christian youth volunteer felt compelled to speak to him. She minced no words, pointed him to Christ, and prayed with him to receive Jesus.

If you're praying for someone who doesn't know Jesus, don't give up. God doesn't want anyone to perish, and He'll do whatever it takes to introduce them to the life-giving Son of God—even if that means using an unconventional, mad-dash, last-ditch effort. 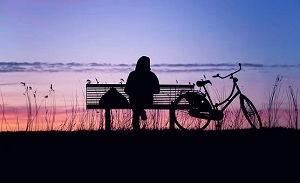 In my mid-forties, I lived alone for the first time in my life.

I was an emotional wreck, feeling as though I’d been dumped into a well of hopelessness. The end of a twenty-five-year marriage thrust me from my comfort zone. I left my hometown and the home I had lived in for over twenty years where I’d raised my three children. As I divided personal possessions and keepsakes, I wrote a poem entitled, “But Who Gets the Friends?”

Although I had my family’s support, I often felt alone and had days when despair nearly engulfed me. Loss overwhelmed me.

But with perseverance, I engaged in simple pleasures that might cheer me. Each evening, I set the table for one, although I didn't have much of an appetite. Even when the menu was tomato soup and saltine crackers, I used a pretty placemat with a matching cloth napkin and lit a candle. At first, this was simply a discipline I demanded of myself, but gradually I looked forward to that time of day. I became comfortable with myself.

I learned that being alone doesn’t necessarily mean being lonely. I read God’s Word and devoured Scriptures that nourished and filled me with hope for my future. Gradually, I realized my happiness didn’t rely on relationships with others but my relationship with God Himself. I felt His presence and the pleasure of living with Him.

The future that once looked dim and fading took on new light and shed new hope. God was showing me the way. With time, I knew I wasn't alone. God lived in and with me.

When you feel lonely, find a way to enjoy simple pleasures. Happiness is fleeting, but the joy found in God's presence endures.