You have given me your shield of victory.  Psalm 18:35 NLT 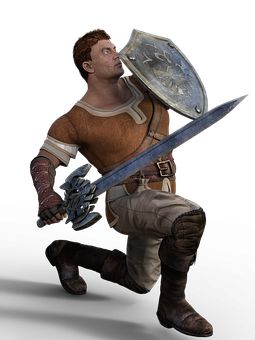 Never had a game evoked such fear in me.

As a middle schooler, I was weak, shy, and non-athletic. I dreaded physical education class—mainly because of one game: dodgeball.

I was always the last one picked when the team captains made their choices. Skinny, freckled-faced, glasses. Nothing that would make them want me on their team. I made sure to stand behind everyone else when the balls started whizzing by, but eventually I was exposed. It was then I began using my shield.

Getting hit on the torso or below the waist was bearable, but a hit in the head could be tragic. Mom had strictly instructed me to guard my glasses with my life. She and Dad could not afford to replace them. As the balls made their aim at me, I shielded my head with my arms and hands.

As a teenager, I tortured my two younger brothers with the same game by lining them up on the edge of our open carport and throwing balls at them. They, too, used their arms and hands as shields, but doing so didn’t stop them from cascading from the ledge to the ground below when they were hit.

David was a warrior and very familiar with a shield. While he didn’t use one against Goliath—the giant he fought—he did in many battles after that as he protected his nation against their enemies.

Thousands of years into the future, the apostle Paul would say faith is the believer’s shield. As my hands shielded me from slams by the dodgeballs, so my faith shields me from the darts of my soul’s enemy. When I believed in and accepted Christ as my Savior, God gave me the righteousness of Christ. Though I take many hits in life, that body armor of righteousness—along with my shield of faith—keeps me from being defeated.

Faith helps me move forward, even when I can’t see the way. Faith prompts me to obey God’s plan, even when it appears illogical. Faith keeps me determined in my walk with the Lord, even when I sometimes want to give up. Faith shields me from persistent and uncontrollable doubt, anger, frustration, anxiety, worry, depression, and fear.

God gives all His children a shield. Take yours, so you can fight life’s battle with a guarantee of success.