Rise from the Ashes 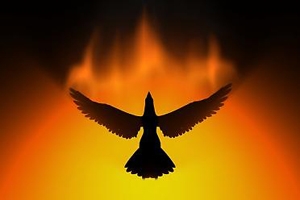 I was sick as my ministry partner, Eddie, broke the news. “The sites are corrupt. Unrecoverable. We’re working. But this isn’t good. We need a plan to move ahead.”

So began a two-week effort to put a band-aid on the bleeding. The ministry websites were gone and all I could mull over was seven years and two thousand devotions . . . gone.

Eddie and I talked numerous times over the next few days discussing how to proceed when it occurred to me, this is the ministry’s seventh year. Seven. God’s favorite number . . . the one that signifies completion and recognizes rebirth. It is, by all due rights, our year of Jubilee.

I don’t know about you, but Jubilee symbolizes joy and celebration. Not loss. There was little to celebrate in the loss of seven years of ministry. That’s when we agreed – this was our year of rest. We’d been praying God would take this ministry to a higher level. It appeared He was just doing His job. The same job He did after creation and one to which He commanded the children of Israel to adhere.

“Maybe it has to crash and burn before we turn loose enough for God to rebuild,” Eddie said. “The seventh year is the year of forgiveness of debt. The let-it-go year.”

Eddie was right. I’d even mentioned this was our blessed year. Seven!

There’s a method behind God’s seemingly odd madness. His people had worked hard for six years. Their fields were prosperous and the nation thrived. At the end of the year they cleaned the fields, set fire to the rubbish, then spread the ashes. They were instructed to forgive debts, set men free . . . let go and move ahead. Just as God completed His creation on the seventh day, and rested, He demanded it of His children. Time to rest. Time for renewal. And through this time of rest, celebration ensued for the provisions of previous years. The next year, the fields were tilled and planted. Through the ashes, rose new and stronger crops.

It was time to buckle down and let go. Not quit! But let go. So we did. We released the old, crawled from our face to our knees and began to pray. We let go. Forgave the debts that anyone might owe (i.e. promised devotions or help), and we moved ahead. In three days (look at the significance there), God provided the funds for a new and better site. And like a phoenix, this work is rising through the ashes. Rejuvenated.

When God commands you to rest. Do it. Trust Him. After all, He better than anyone knows what can rise after three days. Let go and be renewed.