But seek first his kingdom and his righteousness, and all these things will be given to you as well.  Matthew 6:33 NIV 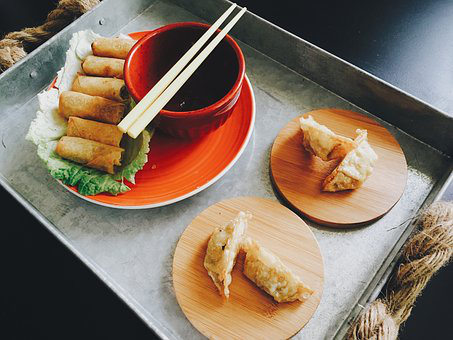 I vowed not to miss church.

Vacationing with my family in Hong Kong, I made it my goal not to miss Sunday church service. I checked with the locals, and they suggested a church that wasn’t too far from the place I was staying.

I strolled onto the main thoroughfare Sunday morning. The mass of locals who were in search of their morning cup of tea swept me along. It was only seven-thirty, but I was already withering from the simmering heat and drenching humidity. The clatter of woks and savory aromas of freshly prepared wonton soup and pan-fried noodles shifted my taste buds into overdrive.

A tea house with the caption “Air Conditioning” grabbed my attention. I slipped inside and plopped down at one of the dining tables to bathe in the coolness. What a mistake. The Dim Sum peddlers in their shimmering aluminum food carts swarmed me—parading steaming shark fin soup, assorted dumplings, and elaborately decorated desserts around me like a well-choreographed musical.

Before long, my taste buds were screaming for a dumpling. I said to myself I would attend church later. Later never came, and God was nowhere to be found. I knew sitting down for Dim Sum wasn’t bad in itself, but I was allowing worldly temptations to distract me from God.

Just like Adam and Eve in the garden, I gave in to what I wanted to do. I took whatever I saw and allowed my body to have whatever it wanted—which was to taste the forbidden dumpling. I wasn’t seeking God first.

This was a sobering reminder of my weakness. If I continued down this road, allowing self-centered wants to govern my actions, God would soon become nothing more than a faint memory. The only way back was to make God first and trust He would provide everything that was good for me.

As I moved from me-first to God-first, I discovered an abundance of God’s grace that supplied the power to resist the temptations crossing my path. I was no longer an easy prey to the “tea houses” of my life that beckoned me to abandon God for whatever I unwisely wanted.

Doug Lim lives in Los Angeles, California, with his wife Cindy. He is in the empty-nester chapter of his life. He is a spare-time Christian freelance writer and also enjoys writing anonymously for a self-help service group. He teaches religious education, volunteers as a chaplain, and serves in various other ministries.