You will not fear the terror of night, nor the arrow that flies by day, nor the pestilence that stalks in the darkness, nor the plague that destroys at midday.  Psalm 91:5-6 NIV 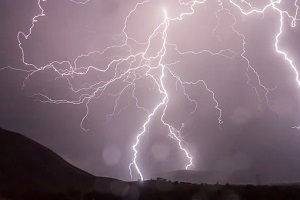 I barely had time to register the strange movement of the clouds swirling above.

Suddenly, the top third of an old oak tree twisted off and plummeted to the ground. In the next instant, the wind howled through the open windows in the back of the house, bringing blinds, curtains, and even pictures off the walls as it roared through the house.

The whole world seemed to tilt from the wind’s force. Above my head, the front porch roof creaked ominously as the winds pounded the front of the house. All around me, I heard trees cracking apart like the sound of a thousand bedsheets tearing at once.

Thirty seconds later, the storm passed. Branches and leaves continued to fall for the next minute or two, but the worst was over. In the aftermath, our yard was littered with the remnants of oak, cedar, hickory, and black walnut trees. Some of the limbs and tops were as thick as twenty inches in diameter.

The weather forecast had called for severe thunderstorms. But to be honest, at this time of the year—and in the fall—we get so many severe thunderstorm warnings they tend to fade into the background. So had this one … until it fell on us with all Mother Nature's fury.

The important thing, however, was that we were safe. Our house was intact, despite some interior rearranging by the wind. Our cars and camper were undamaged, and our pets were all okay. Even our garden was unharmed. And none of that was really a surprise.

You see, God's promises of protection are everywhere in our house. Some are verses in fancy-framed prints, and some are scrawled in magic marker on a simple sheet of typing paper. But as a family, we incorporate them into our prayers. God's magnificent blessings and promises don't do us a bit of good locked away in a pretty leather-bound book. I have to pull them out of the Bible and carve them word by word on my heart.

Sometimes, I can see trouble coming, but more often than not, it's the trouble I don't see coming that reaches out for me. Often, when I least expect it, I only have time for an earnest, "Abba, Father," before I clutch at those promises I've engraved inside me.

Are God's promises written on your heart?