Blessed is the one who perseveres under trial because, having stood the test, that person will receive the crown of life that the Lord has promised to those who love him.  James 1:12 NIV 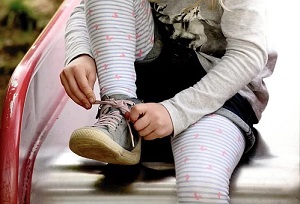 The insistent wailing of my daughter twanged my last nerve that cold mid-winter afternoon. Everything within me screamed along with her to just give up. That was years ago when Alyssa was seven years old. Born with special needs, she has always struggled with fine motor skills despite years of occupational therapy. But I was determined to teach her to tie her own shoes.

Several months earlier, I had analyzed the dreaded task and broken it down into its smaller parts: pull up the tongue, yank the laces, cross the laces, bring one lace under the other, tighten the laces, make the “bunny ear,” run the other lace around, and, finally, the coup de grâce, push the bunny through the hole and pull it out on the other side to tighten the tied laces. Then I came up with various exercises to strengthen her hands, arms, and shoulder muscles for the task ahead.

Since September, we had spent thirty minutes every day doing exercises and working on individual components of tying laces. Those thirty-minute stretches weren’t pretty, but we had progressed to the final step by January. Then we hit the roadblock. Pushing the lace through the hole and pulling it out the other side. Impossible.

James wrote about perseverance for moments like this. He said if we keep striving toward the goal, God gives a reward–a crown of life–to those who love Him. He does not, however, promise the striving will be easy.

Taking steps forward is often its own reward and motivation. But when we’re stuck, the rubber meets the road. It’s when, clinging to the certainty that with God we can keep going, we push forward toward the goal despite hardship and pain.

A couple of months later, God gave us victory over the shoelaces—but not without tears and frustration.

Commit to persevere through whatever trial you’re experiencing. The crown of life awaits you.

Annie Yorty is a child of God who loves living for Jesus. She has a passion for teaching and helping people around the world. After a career in accounting, she homeschooled her children for sixteen years and now indulges a lifelong love of writing. Life in Waynesboro, Pennsylvania, is busy with her husband of thirty-five years, two grown children (one with a disability), and a furry beast (a.k.a. Labradoodle).