As iron sharpens iron, so a friend sharpens a friend.  Proverbs 27:17 NLT 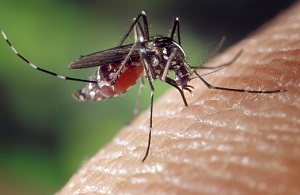 An old African proverb says, “If you think you’re too small to make a difference, you haven’t spent the night with a mosquito.” I had.

Grandmammy lived on Highway 210 near Vance, SC. During the long sultry summers, staying with her meant raising the windows so air could creep through the screens in her old unairconditioned farmhouse. The only problem was that her screens often had small tears in them—through which mosquitoes swarmed.

Spending a night with Grandmammy meant fighting a battle. Before bedtime, she sprayed the room and around the screens using a can of Raid. Then, as dusk neared, a mosquito truck ambled down the highway, spraying a fog of nose-hair-curling poison.

Despite all these efforts, I heard that all-familiar singing no sooner than I had lain down. Since the room was pitch-black dark, I couldn’t see her. I could only swipe, hoping I’d kill that female who wanted to suck my blood, fertilize her eggs, hatch more of her kind, and make me itch.

So the old African proverb was right. I’d spent the night with mosquitoes, and they had a pervading influence. They can turn a night in a hot room into a nightmare. The spread of their influence causes us to do any number of things to ward off their attack—some of which we may later regret.

But influence doesn’t have to be negative. Wise King Solomon says a friend can sharpen another friend, just as iron sharpens iron.

God gives me the privilege of being a positive influence on one hundred plus middle schoolers five days each week. I don’t take the responsibility lightly. Hopefully, my influence will motivate and encourage them. I also have the privilege of influencing thousands of people worldwide through the writing ministry God has entrusted to me. I don’t take that for granted either.

We all have areas of the world God wants us to sharpen. Just like the mosquito, God wants us to buzz into the areas He has designated for us, influencing the people in our circle in a way that points them to Christ and helps them become more like the person He wants them to be. The ways we can do it are numerous, but God will help us succeed if we ask.

Find your world of influence, and sing through it.