Therefore, if anyone is in Christ, he is a new creation; old things have passed away; behold, all things have become new.  2 Corinthians 5:17 NKJV 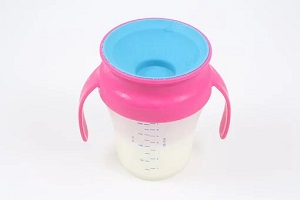 "Just throw it away," my daughter said after I discovered my grandson’s sippy cup of milk in one of his buckets.

Theo hadn't been to our house for a few days, so that cup had plenty of time to create a science project. You can imagine what was inside. I considered my daughter's suggestion and was tempted to throw the cup away and pull out another one. But then I thought, This is a good cup. It just happened to be the victim of negligence. I had raised four kids, so this was not a first for me.

Before opening the cup, I held my head far away so I wouldn’t smell the aroma it was sure to bring. With hot water running and tools in hand, I tackled the mess.

As I worked, I thought of how that cup symbolized life and how we often get lost in the chaos. We become stuck in our own little bucket, ignoring or forgetting about our problems—problems that have no option but to sit and sour.

For those who have dealt with sippy cups, we know all the holes and spaces in which liquids can seep. Likewise, our lives have holes and spaces, and, if allowed, our mess will seep into each one.

I once had a pretty big mess inside me. Feeling alone and rejected, I came to a point where Christ was my only hope. As I reached up to Him, He pulled me out of my bucket and washed me clean. He can do the same for everyone who asks. No matter how difficult a mess we create, God will never toss us away. He will go to the dirtiest and most difficult places to make us clean.

If you’re in a mess, reach out to Christ. The blood of Jesus will make you clean.

Brandy Hopkins is a pastor’s wife and co-founder of a teen girl's ministry called GC3. She writes devotions, mentors girls and women, and serves as youth leader at her church. Overcoming many of her own personal obstacles, Brandy has a heart for girls and women. Using her testimony to allow them to see God’s work in her life, she has reached countless numbers of girls and women over the years, teaching them that God can do the same for them. From writing devotions to running a newsletter for her employer, Brandy has a passion for writing and has written a devotional for women entitled Letting God, which is based on stories from her own life. A recipient of the Lloyd Boyd scholarship, she has also been published in an anthology by EAbooks publishing. Brandy teaches yoga at her local gym where she helps with marketing and website editing. She enjoys spending time with her family, playing with her grandkids, reading, writing, yoga, and running.