The Light in the Window

In him was life and that life was the light of all mankind. The light shines in the darkness and the darkness has not overcome it.  John 1:4-5 NIV 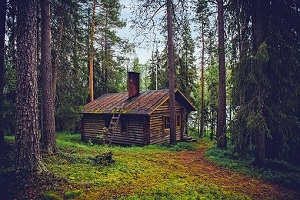 “It’s a great painting,” Joe told his artist friend, Mike, “but it seems so dark and dismal. Can you make it more cheerful?”

The two friends were examining Mike’s latest painting in his country cottage series. While Joe liked the painting, he felt something was missing. Mike’s cottages were usually banked with colorful flowers, but this was a winter scene. Snow packed around the walls, icicles clung to the eaves, and dark angular forms of trees—their branches draped with show—roamed in the background. The cottage windows were dark and shadowy. The only sign someone might live in the cottage was the thin plume of smoke wafting from the stone chimney.

Joe was honest. “Yes, it seems too gloomy.”

Mike nodded slowly, cocked his head, picked up his palette and brush, and applied a yellowish gold hue to the windows of the house. Now, it seemed lamplight reflected from the windows and shone on the snow, changing a dismal dreary scene filled with murky shadows into welcoming cordiality. The added light changed the painting entirely.

Such is what happened when Christ arrived in the world. With the light of His presence, He came into a depressing and dreary world laden with evil and misery. As He did, He displaced the darkness and replaced it with His personal luminosity. Now, His light shines into every aspect of our lives and then out to a suffering world.

Let the light of Christ in you dispel the darkness around you.