But each person is tempted when they are dragged away by their own evil desire and enticed.  James 1:14 NIV 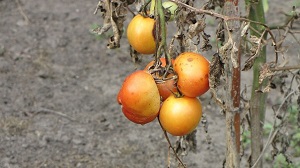 My first daring escapade as a young girl took place on a rainy day when the boys in my neighborhood felt a little too mischievous and asked if I would accompany them for some fun.

Curious about their plan, I followed them to a garden of tomatoes in a nearby backyard. The boys picked what appeared to be all the rotten and damaged tomatoes and stored them in makeshift pockets in their t-shirts, then relocated behind some bushes to line up their ammunition.

Remaining out of sight, I watched in fascination as the boys aimed their squishy missiles with such precision, striking the passing cars effortlessly. I dared myself to throw one, knowing full well my arm did not possess the strength to hit a moving target. Filled with relief that I would not be forced to give my father an explanation for this vandalism, I went home. Later, I reflected on how curiosity drew me in to this seemingly innocent activity. I had no gauge with which to measure the damage caused to the cars or my character.

I felt guilty, yet had to admit that this misbehaving felt good. I questioned why I had no power to turn away from it. My sinful desire and controlling weakness lured me in without anyone’s help.

We might ask if it’s possible to be free from sin. James said we fall into sin because of a sinful nature, but Jesus said, “If the Son sets you free, you will be free indeed” (John 8:36), meaning we can receive power from God to resist temptation.

We may feel like rotten tomatoes on the inside, but with God’s help, we can experience freedom from the bondage of our sin nature. God helps us war against sin through the indwelling power of the Holy Spirit, who equips us to stand against our own evil desires.

Rejoice today that your heavenly Father has provided a way out from under the guilt and condemnation of sin. Trust Him and receive His forgiveness.

Anne O’Donnell grew up in a household where the word “relationships” did not exist. Although she craved them at a young age, and attached herself to destructive ones into adulthood, she never expected that Jesus was preparing her for a future of reaching people—a future born out of the pain and depression that controlled her for so many years. She now spends countless hours online, connecting with individuals who believe they have no hope. She remains in awe of a God who used her past to create the future she now enjoys. God has blessed her with four children and a husband who has had to endure many challenges from living with her. She loves Jesus and continues to press forward into her senior years with a hope that is alive.