And David was greatly distressed; but David encouraged himself in the Lord his God.  1 Samuel 30:6 KJV 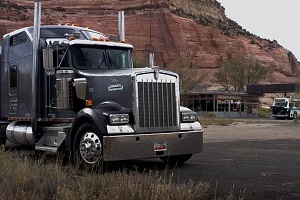 “I cannot believe you just did that!” Ronnie groaned, while putting his hands on top of his head as if in pain.

Sometimes, we work continually at something, only to watch it crash and burn. Such was the case for me in 2009 at the NC Truck Driving Championship. After several years of choking under pressure, I'd finally redeemed myself. I'd just out-driven every driver in my class except one. All the hours of staying after work, practicing on Saturdays, and even practicing in the rain had paid off.

With a sigh of relief, I released my seatbelt, opened the door, took one step on the fuel tank, and then back onto the ground. I didn't realize it immediately, but I'd exited the truck without using a three-point exit. A 25-point penalty resulted. Second place disappeared and I fell to fourth place.

I slowly walked back to our team tent in disgust, knowing I'd let everyone down. I've never been so sick to my stomach. For two years, I lived with the anguish of knowing I'd cost myself a trip to the nationals in Houston, Texas. A week in Houston getting VIP treatment, gifts, and a free vacation. All gone because of one momentary lack of concentration.

I lived with that until 2011, occasionally being reminded of it by coworkers, but I didn't quit competing. I doubled down, worked harder, and won third place a week before surgery ended my career.

When we’re in distress and things are bad, we sometimes have to encourage ourselves, just as David did. We cannot let our past defeat us and make us afraid of the present. David went on to win battles. He encouraged his men and became a great king. He didn't allow past mistakes and failures to define him.

We can never lead others to God's forgiveness until we learn to forgive and encourage ourselves. Sometimes, we just have to get up and dust ourselves off.