Put on the full armor of God, so that you can take your stand against the devil?s schemes.  Ephesians 6:10 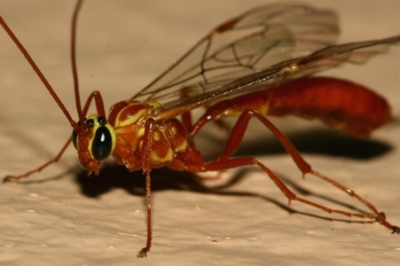 The wasp looked at me from the lampshade with both of its baleful, compound eyes. It did a couple of push-ups and raised its wings, looking like a gunslinger flexing his fingers and unsnapping his holster. The other dozen or so wasps my grandson Caleb and I had captured over the last couple of hours had been relatively easy, but this fellow was different. Something had alerted him, or maybe he had just watched us gathering up his comrades.

Earlier that chilly afternoon, my wife and I had transferred our house plants from their summer home outside, back into the house. The forecast called for the first frost of Fall, and we were playing the seasonal game of finding enough indoor winter sunlight for each plant. The Boston ferns wound up in the dining room and approximately two hours later, the first wasp appeared.

As it turned out, one of the Boston ferns had been a convenient summer home for a colony of wasps. Now they were warming up, and waking up, and in the false sunlight of the indoor lamps, they were moving up and out. Over a dozen wasps buzzed around the house. To say Charlotte was not a happy camper would be understating it considerably.

We live in a very rural environment, and wasps are a common pest. Occasionally, one would find its way inside. Believing that simply taking a wrong turn shouldn’t be a death sentence, I had taught Caleb how to safely trap them under a glass and transfer them back outside. Now, together, we had cautiously rounded up most of our uninvited guests and moved them back outside. And by moving the glass very slowly, I was able to corral even the wary gunslinger.

Sin has a way of sneaking in on me just like the wasps and their green, leafy Trojan Horse. Every time I turn around, I’ve wasted another hour on Facebook. The TV drifts into some garbage program, and I’m too lazy to change it or turn it off. Even magazines with their subliminal advertising can suddenly have my thoughts careening off to places I don’t want to go. Sin is everywhere in this fallen world, and it’s always looking for a way in.

That’s why Paul implores us to put on the full armor of God: shield, helmet, breastplate … all found in His Word, free of charge. Open your Bible, and suit up.

As I’m constantly relearning, it’s a lot easier to put on my armor ahead of time, than to run around afterward, mentally trying to trap my sins under glass like lost and errant wasps. Jesus said it simply: “Get out of here, Satan!” Works for me.

(Photo courtesy of morguefile and xandert.)