No, dear brothers and sisters, I have not achieved it, but I focus on this one thing: Forgetting the past and looking forward to what lies ahead.  Philippians 3:13 NLT 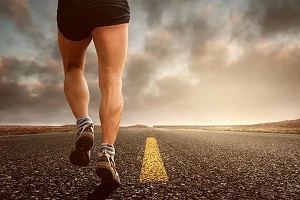 Looking back is never a good thing.

In 1954, Englishman Roger Bannister and Australian John Landy, who were the first two men to break the four-minute mile, met in a race in Vancouver, British Columbia, Canada. With ninety-seconds remaining in the “Miracle Mile” race and Landy ahead, Landy glanced over his left shoulder to see his opponent's location. At that moment, Bannister surged past Landy on his right side and won the race by eight-tenths of a second. If Landy had not looked back, he would have won the race.

The apostle Paul learned what John Landy had not; that taking our eyes off the prize is never good. What we focus on, we tend to achieve. Paul knew the key to success was to forget the past, both good and bad.

Paul knew he had not achieved or become perfect, but he looked forward to becoming more like Christ. Rarely are we defeated in our faith by today's problems alone, but by dwelling simultaneously on yesterday's failures. We are not designed to multi-task present and past struggles. Looking back on past failures, other than for redemptive purposes, is counterproductive.

If anybody could have rested on past achievements, it was Paul. He had suffered and achieved more than any man alive, yet he knew he must continue striving until he arrived in the presence of Christ in heaven.

Considering past successes can limit our future vision. Every new movement of God has been resisted by the previous one. Good can become the worse enemy of best. John Landy dominated the race until the end when he took his eyes off the prize.

Are you, like Landy, going to lose the race because you are looking back?