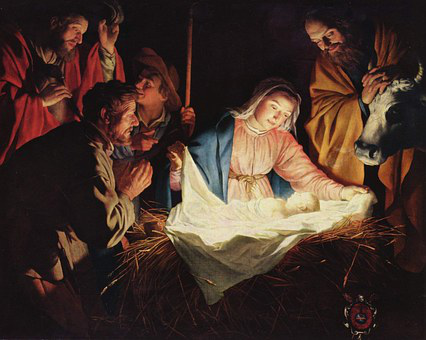 Utter chaos. That was all I saw on television.

My stomach twisted as the special news report spit out images of screaming people, gunfire, and destruction. Yet another terrorist attack on innocent people.

I pulled a blanket tightly around my face and peered over the edge. I just wanted this to all stop. My eyes shifted to our newly erected Christmas tree. The lights twinkled as the tree rotated, bringing into view precious ornaments—each with a story. Each with a memory. Why can’t things be like they used to be? No one should have to suffer at Christmas.

Mary must have thought the same as her life shifted with the news of a pregnancy that could get her killed. Her forthcoming marriage now in danger … and what about Joseph? What if he said no, rejected her? She’d been chosen by the Almighty as the vessel to bring the Savior into the world. Who in their right mind would believe that?

The angel who delivered this miraculous news to young Mary reassured her even the impossible would be possible. She need not be afraid. So Mary gave up her fear and turned her trust to the Father. She sang His praises, even though she knew her life would be shear chaos. Mary found peace in the promise from the angel … unfailing words.

Imagine the joy and the fear Mary must have felt. Chosen by God to bring His son into the world. The long awaited Messiah being born to a peasant. Even in her limited knowledge, this was certainly not what Israel expected. A simple birth to a simpler servant.

Mary never seemed to find rest as she reared the Son of God. Threats on His life, the oddity of His childhood faithfulness, the determination to teach in a world that refused to believe. His sacrifice. Yet in the promise that God’s Word would never fail, Christ came, died, and rose again.

The chaos the world faces today isn’t much different than when Jesus walked the dusty paths of Judea. Sin still wreaks havoc. Death and destruction still take front and center. Yet, in the wake of it all, God’s words never fail. His hand still covers us. God still cares for His people. He is the unchanging, unmovable, unstoppable King.

As you enjoy Christmas today, don’t think of the mess in the world. Be like Mary. Redirect your faith to the One who promises His Word will never fail. There is where you will find peace on earth.

From the staff and writers of ChristianDevotions.us and Christian Devotions Ministries,

and cover you with His peace. Merry Christmas.