God Looks at the Heart

But the Lord said to Samuel, "Don’t judge by his appearance or height, for I have rejected him. The Lord doesn’t see things the way you see them. People judge by outward appearance, but the Lord looks at the heart."  1 Samuel 16:7 NLT 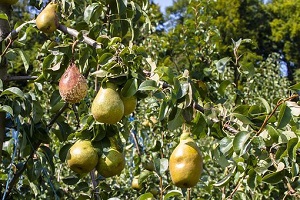 It wasn’t what I expected to find at all. In fact, it was just the opposite.

It was another fend-for-yourself night at our house. The kind of evening when nobody wanted to cook, so the declaration was made that everyone was responsible for finding their own food if they wanted to eat. I asked Mom if we had any pears left, secretly hoping she’d offer to cut one up for me if we did. I lucked out. We had some, and she offered one to me. But after looking at them, Mom said we had one and a half. One looked great, but the other had bad spots that would need to be removed.

As Mom cut the pears, I set up a game for us to play while we ate, then went to the kitchen to scrounge up the rest of my fend-for-yourself supper. That’s when Mom said something surprising. She told me that once she peeled the pears, the beat-up one was beautiful on the inside, but the one that looked perfect had bad spots under the skin that needed to be cut out.

I had recently read 1 Samuel 16:7: “The Lord doesn’t see things the way you see them. People judge by outward appearance, but the Lord looks at the heart.”

That’s exactly what we had done with the pears. God used a simple observation to remind me of a powerful lesson. Just as we had declared one pear bad and one good by how they looked on the outside, so we often do the same to people. We see someone who looks different than us and judge them. We jump to conclusions about what a person can and can’t do based on their physical appearance or what they’re wearing. We do the thing God told Samuel not to do.

God challenges us to stop looking at outward appearances and to look instead at a person’s heart.

Be brave enough not to judge by outward appearances.

Passionate about helping people find joy for their journey, Josie Siler, a small-town Wisconsin girl, has big dreams. As a multi-award-winning author and photographer, Josie shares God’s gifts of beauty, hope, and adventure with people who are overwhelmed by life’s circumstances, encouraging them to walk in the freedom and joy found in Jesus. Josie’s publications include the compilation Breaking the Chains: Strategies for Overcoming Spiritual Bondage, along with numerous articles for the web and magazines. Her photographs are published in the award-winning book Advent Devotions and Christmas Crafts for Families. When she’s not writing or taking pictures, you’ll find Josie curled up with a good book, eating chocolate, and cuddling her teddy bear dog Ruby Mae (a.k.a. The Scruffy Princess). Connect with Josie at JosieSiler.com.