Be completely humble and gentle; be patient, bearing with one another in love.  Ephesians 4:2 NIV 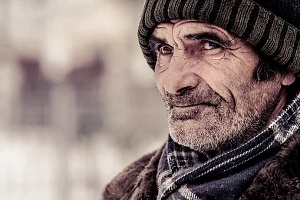 About ten years ago, Father Kirby adjusted his cap on his head and called out to me as he headed out the back door.

"Breakfast was excellent,” he said, "Thank You!" He continued, "I left your money on the table. See you in the morning!"

I called to my grandson Caleb to put his shoes on and make sure his "Paw-Paw" didn't get lost. Out of curiosity, I went to see what Father Kirby had left by his breakfast dishes. Sure enough, he had left money. A quarter, a dime, and a penny. Thirty-six cents. A tip, I suppose, for his breakfast. Or perhaps he thought he was paying the bill.

Father Kirby was ninety-one years old at the time, and, physically, was as healthy as could be. A career in the Army saw to that. His issues were mental, a touch of Alzheimer's. More than a touch, really. He was living with us that summer—a challenge for all of us.

The constant questions were enough to drive us insane. If they had been different questions, maybe it would have made a difference. But Father Kirby locked in on a particular issue and asked the same question over and over. He would have forgotten the answer, and even that he asked the question, within seconds of us finishing the answer. And so it started over.

Finally, I hit upon the idea of writing a brief history of where he was, who we were, and why he was living here. When the questions started, I simply let him read the history and find the answers for himself. Of course, sometimes when he started in, I felt like shouting, "JUST READ THE PAPER, FATHER!" I didn’t, of course.

In a sense, we have a paper full of answers to our questions, too. A book, actually. Our Bible, the living Word of God. I wonder how many times, listening to my prayers, that my Father in heaven has wanted to shout, "JUST READ THE BOOK, CHILD!" He doesn't, of course.

I read my Bible every day. It isn't enough. I know I should be immersing myself in the Word and that there are times when I let the television or the computer or the latest bestseller distract me from where I should be. I'm continually falling short. But my Father, my God, is patient. Thank goodness He doesn't shout.

Later that night, I slipped the thirty-six cents back into Father Kirby's pants. I knew I'd find it on the table, again, somewhere down the road. And I did. But that's okay. It reminded me, again, of how patient my Lord is with me. Thank You, Father.

Make a regular practice of thanking God for His patience.