The heavens declare the glory of God; the skies proclaim the work of his hands.  Psalm 19:1 NIV 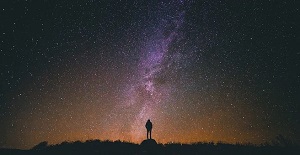 At six in the morning, the stars shone brightly in the cloudless sky.

An older woman put on her robe, stepped onto her porch, and looked up at the stars. She heard the sound of traffic a few blocks away as workers began their morning commute. Many miles away, a farmer stepped outside his barn and paused to look at the magnificence of the starry night. He heard the sound of a rooster crowing. Further away, a young woman in the mountains stepped into her backyard, beheld the beauty of the morning sky, and heard the gentle sound of a nearby stream.

God’s handiwork is evident to all: city dwellers, rural dwellers, and mountain dwellers alike. People in North America, Africa, and any other continent can see it. It is a gift of beauty, available to rich and poor alike.

The psalmist states that the heavens, including the stars, declare God’s glory. It is hard to imagine anyone gazing at a starry sky and not feeling a sense of awe. The beauty is evident to all. It speaks of a Creator whose masterpiece leaves us speechless.

The psalmist also says the heavens are God’s handiwork. When I think of handiwork, I picture a woman knitting. Her fingers move deftly while she carries on a conversation or watches television. For an experienced knitter, the handiwork is effortless. The psalmist gives us an image of God placing the stars in the sky as effortlessly as a knitter completes a row of stitches.

Perhaps God hung stars because He wanted to remind us of His presence. To give the early riser a reason to pause before rushing into the day. To see a magnificent image and to stand in awe of a Creator who effortlessly placed the stars in the sky.

Take time to pause and praise our magnificent Creator.

Diane Furlong is a Christian devotion writer who is happily retired and enjoying life in Florida. She enjoys writing, involvement in church, volunteer work, and reading. She loves to walk outdoors and enjoy God’s beautiful creation. You can follow Diane on DianeFurlong.blogspot.com.