Jesus answered, "It is written: ‘Man shall not live on bread alone, but on every word that comes from the mouth of God."  Matthew 4:4 NIV 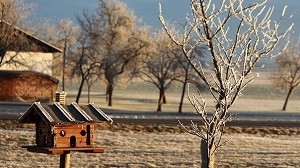 The whirling, fluttering kaleidoscope of colors around our birdfeeder was impressive.

Scarlet Cardinals, Blue jays, Goldfinches, Red-headed Woodpeckers, and a menagerie of other songbirds all flocked to the bird feeder in our front yard. Business at the feeder was busier than usual because we had been nearly a week below freezing. The four-inch cover of snow and ice didn’t help the birds either. Natural food was scarce.

Watching them interact fascinated me. In normal times, some of the larger birds, especially the male Cardinals, are territorial. They camp out on the feeder, claiming it as their own. Only their mates—roly-poly brown female cardinals, fat with eggs—can get near the food. They gorge themselves on the seeds of sunflower, safflower, thistle, flax, and corn. Eventually, they get their fill and grudgingly allow other birds at the feast.

However, on this day, with freezing temperatures and snow cover, all the birds had adopted a live-and-let-live attitude to the free food. They hovered and fluttered and waited their turn, diving for an open space at the feeder as soon as one became available. The bare trees in our front yard seemed alive with colorful birds, inching closer to the feeder by hopping from limb to limb.

Also watching the show were our cats Fritz and Chipmunk. They, too, seemed to have adopted a casual attitude toward the birds. They contented themselves with watching the activity. They lay curled on the wicker chairs by the firepit where a couple of logs burned slowly, keeping them warm. Only when a bird flew too close to the porch did they chitter a cat’s frustration warning: “Don’t make me get up from here. You won’t like it if I have to get up.”

For Christians, too, a spiritual winter is fast approaching. Even now, the temperature is dropping, and the clouds, heavy with snow, drop lower and lower. The signs are everywhere. The abundant nourishment we have used to feed our spiritual selves vanishes at an alarming rate, and we find ourselves in an increasingly hostile world. We are strangers in a strange land.

Even so, we still have the delightful nourishment, the “feeder” our Father in heaven has provided. We have His wonderful Word, the Bible, our roadmap to Him that He so graciously has given us.

Eat up! Gorge yourselves on His words of love and grace. Eat, now, while the manna is here...because the winter of our Christianity is coming.