Raised from the Dead

Let perseverance finish its work so that you may be mature and complete, not lacking anything.  James 1:4 NIV 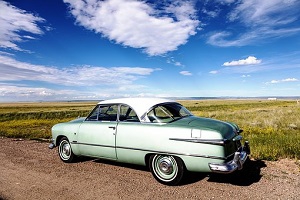 My sixteen-year-old grandson, Caleb, slumped behind the wheel of the car in abject dejection.

The vehicle in question was a 1998 Ford Crown Victoria. It would be his first car, if he could get it running. Unfortunately, the twenty-three-year-old engine defied his every attempt to make it turn over and fire. It didn't help that the car had sat in the corner of the yard for almost two years.

The Ford had belonged to his great-grandfather. When my wife, Charlotte, acquired it, the plan had been to save it for Caleb. And Caleb was eager to have it. He had washed and polished it inside and out. He had drained the gas tank and replaced it with a gallon or two of good gas. He had checked fluids, cleaned filters, tightened belts, replaced wires and clamps—and still, the car refused to run. Caleb had practically memorized the owner's manual and watched countless YouTube videos. Yet, with every new test turn of the ignition, the engine remained frustratingly dead.

Seeing Caleb's frustration, I said a quick silent prayer: "Father, if there is any way this car is going to run, please guide Caleb to the answer."

Caleb slid from behind the wheel, planning to remove the jumper cables that supplied power from our Escape to the Crown Vic. But he stopped suddenly. "Opa," he called, "these cables are hot to the touch." I checked them. They were indeed hot. And with that, I knew the answer. "Thank you, Father," I silently prayed. I waited for Caleb to work it out for himself. Which to his credit, he quickly did.

"Opa, these cables aren't strong enough. That's why they're hot. We're not getting enough power to start the car!"

Have to love that boy. He was right, of course. We quickly swapped out the cheap jumper cables for a battery charger with industrial-strength connector cables. After letting it charge the battery for thirty minutes, we gathered around the car again. Caleb put the key in the ignition and turned. The crankshaft turned once and then twice, and suddenly the car roared to life. Caleb let out a whoop I'm sure they probably heard in heaven. To be honest, so did I.

Abraham, Moses, Jonah, Sampson, and Paul all failed but didn't give up. And of them all, the Apostle Peter is probably the poster boy.

God doesn't expect us to get everything right the first time. He does expect us to keep trying and not give up. Just as Caleb persevered for his “Crown” Victoria, we persevere for our “Crowns” in Heaven.

Don’t give up. Keep going.