Then the Lord said to Moses: "How long will these people reject Me? And how long will they not believe Me, with all the signs which I have performed among them?"  Numbers 14:11 NKJV 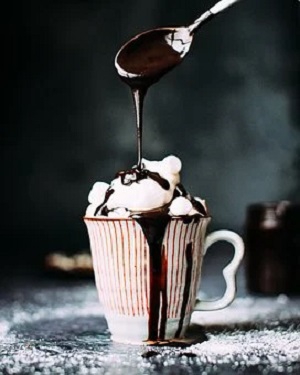 I stood at the kitchen stove and watched the dark, roiling mixture rise to the rim of the silver pan.

Yet every time the boiling moment comes, I feel the panic rise. Once those bubbles form, they crawl up the sides of the pan. Just when I think it’s going to boil over and I will surely burn the house down, the bubbles pop, and the mixture recedes. Then the bubbling begins again, and the rising and falling continue until the timer goes off.

Not once has the syrup boiled over, but my heart races every time. I grip the spoon, at the ready to stir like mad—although I know stirring will ruin the consistency. I tell myself out loud, “Don’t panic.”

Still, the boiling points get me—in chocolate syrup and life.

The Israelites were the same. Ten spies returned from checking out the land God had already promised. Eight of them said the milk and honey were great, but the giants were too big. Two of them reminded the people God was bigger than the giants.

Despite God’s miraculous deliverance of His chosen ones, the people panicked and decided a return to slavery was just the ticket. God decreed their carcasses would fall in the wilderness. Panic cost them the promise.

How many times have circumstances reached a few boiling points that made our hearts race? We quake at the shadows of giants in our lives. We decide panic is better than God’s promises and grab our tiny spoons to do something that makes us feel more comfortable and in control. We forgo the taste of chocolate syrup or, even better, milk and honey because of fear.

Don’t panic. See what God has done. Believe what He will do. The result is oh so sweet.

Kristy Horine is a freelance writer from Kentucky. Her desire is to share stories of determined courage and steadfast faith. She serves on the Kentucky Christian Writers Conference Executive Board and is a member of the American Christian Fiction Writers. She founded 3rd Letter Christian Writers in Lexington, Kentucky, in 2015.