Cain said to the Lord, "My punishment is more than I can bear."  Genesis 4:13 NIV 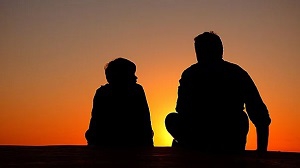 My brother and I had seen our dad’s belt whip out of his pant’s loop before, and we knew what was about to happen—that is, if our two sisters did not intervene.

We had received spankings before for such things as disobedience, backtalking, and misbehaving in church. This time it was for bad grades. Dad told us to sit on the couch in the study. Then he told us why we were being punished.

Our sisters overheard the conversation and intervened on our behalf, talking Dad into punishing us by other means. Dad never spanked us again for bad grades. Our sisters thought it was a “punishment too great.”

While reading about the Israelites disobeying God repeatedly, I judged them. How could they continuously disobey God when He had done so much for them? The Israelites, while wandering through the wilderness heading to the Promised Land, disobeyed God numerous times. He rescued them from slavery in Egypt, and they saw all the miracles He performed to deliver them. He even parted the Red Sea for them to safely cross on dry land. As the Egyptians crossed in pursuit, God crashed the waters down upon them, saving the Israelites from capture.

I realized I resemble the Israelites. I have seen the works of God in many lives, including mine, yet I still disobey Him. How can I judge them? God punished them for their disobedience.

Our sin causes pain and suffering to ourselves and others. We deserve great punishment for our sins. But Jesus took intervening one step further by taking upon Himself the punishment we deserve. Through grace and mercy, He took the punishment that was too great for us to bear by dying on the cross.

Have you received the benefits of the punishment Jesus took?

Earle Readett lives in Greenwood, SC, and is the founder of He Is Worthy Ministry. He is also the owner of Wildlife Wrangler of the Lakelands as well as the music minister at Buffalo Baptist Church in McCormick, SC.  He enjoys hiking in the mountains and spending time with his wife, Lisa. You can contact him at www.heisworthyministry.com and follow him on Facebook at www.facebook.com/groups/281509419804526.