In the past God spoke to our ancestors through the prophets at many times and in various ways, but in these last days he has spoken to us by his Son, whom he appointed heir of all things, and through whom also he made the universe.  Hebrews 1:1-2 NIV 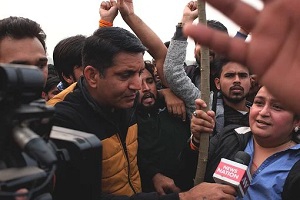 We usually see the word spokesman on television news broadcasts.

When a public official or someone else makes an announcement, they will call a press conference. Reporters arrive and then the person stands in front of a bank of microphones and cameras. Often, in the case of government officials, someone interprets the message in American Sign Language. After reading the statement, the person might answer the reporters’ questions.

If the conference is broadcast and the official appears on the screen, the TV technicians add a label to identify the speaker. If it’s someone else, the label may just read, spokesman.

At other times, we may hear the term when a TV reporter from another station relates the story. If it deals with a city government issue, the reporter will give the official response, and they may say, “A spokesman for the mayor told us that …”

A spokesman is someone who represents and speaks for someone else.

God has spokesmen. At one time, as described by the writer of Hebrews, these were the prophets of the Old Testament who represented God and announced His messages to His people.

Their announcements might have been corrective, informative, or encouraging, especially when they imparted God’s promises. Many of those promises concerned how God would send a Savior—a Redeemer.

And the Lord did just that. He sent His Son Jesus Christ to be the promised Savior and Redeemer and at the same time God’s new spokesman. The new spokesman not only speaks for God but also is the message personified—exemplifying and embodying in His person all of God’s previous promises.

God’s previous spokespersons were human, but the new spokesman is God Himself. Make sure you listen to Him.