Tell God what you need, and thank him for all he has done. Then you will experience God's peace, which exceeds anything we can understand.  Philippians 4:6-7 NLT 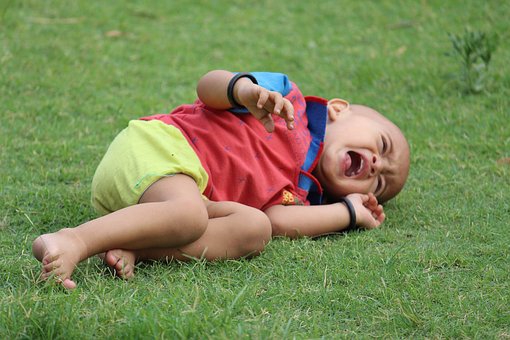 “No, it’s not okay.” His scream pierced the campground and didn’t subside until I got him to Meme.

My wife and I hatched a plot: take our two oldest grandsons camping. At the time, they were two and five. Our daughter appreciated the three-day break from motherhood.

Things progressed nicely … until we made a trip to the bathhouse. On the way back, our two little munchkins laughed and raced. I didn’t worry too much that they were in the middle of the road. After all, the campground only had a small number of sites and the name was Lazy J. What could possibly happen?

Our smallest grandson—the one we call pig pen or Clumsy Clyde—found a way to fall on the gravel road and skin his knee. He wanted to beat his brother back to the campsite, but stepped out of his shoes and tumbled instead.

I couldn’t imagine the hurt being serious, so I picked him up and told him he was okay. That’s when he screamed loudly enough for the entire campground to hear him: “No, it’s not okay.”

I plopped him into Meme’s lap where he had a good cry as she wiped the blood away, applied some antibiotic cream, and sealed the cut with a bandage. Within thirty minutes, he was fast asleep on grandma’s lap.

Paul says all we have to do is tell God what we need and thank Him for all He has done. Once we’ve done that, His peace will saturate our entire body, soul, and spirit—if we truly leave whatever it is in His hands and don’t take it back to worry over.

Life’s trials have a way of knocking us down, scraping our knees, and making us cry. And they have a tendency to do it when we least expect it … when we’re having fun … trying to beat someone else in life’s race. Before we know it, we’re out of commission and don’t know where to turn.

Been there, done that. And instead of running to the Father where I can receive comfort, healing, and peace, I often go to other sources or other people who cannot do what only He can. Unlike my grandson who didn’t believe what I said, the heavenly Father truly can make things okay.

When life’s not okay, go to the One who can make everything all right.