But Naaman went away angry and said, "I thought that he would surely come out to me and stand and call on the name of the Lord his God, wave his hand over the spot, and cure me of my leprosy."  2 Kings 5:11 NIV 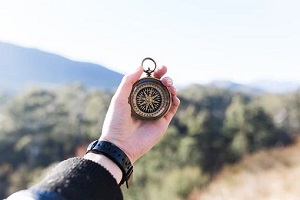 The answer for direction I’d been praying for seemed right in front of me, confirmed by a settling in my soul that finally brought a sliver of peace. The answer was simple, but one that seemed too simple to be legitimate.

I tend to expect answers to be multilayered, well-planned, or detailed. But sometimes God works in ways that seem oversimplified, crazy, or even laughable.

Take Naaman, for instance. He was a high-ranking soldier with power and authority, accustomed to being in control of situations. He was also a man afflicted by leprosy.

A servant girl in Naaman’s household suggested that he see the prophet Elisha for healing. Naaman got permission and went, but Elisha didn’t come to meet him. Instead, Elisha sent a message to Naaman through his servant: “Go wash in the Jordan River seven times, and you will be healed.”

Naaman reacted as many of us might: with anger and disbelief. What made the Jordan River more special than others? Why had he traveled so far to be given an answer that seemed ridiculous? Why hadn’t Elisha bothered to see Naaman himself?

In other words, Naaman said the same thing to Elisha’s messenger that I said to God: “You’ve got to be kidding me.”

Naaman’s servants convinced him to go down to the river. He followed Elisha’s instructions—despite how odd they sounded—and was healed of his leprosy.

God doesn’t need fancy, complicated, or attention-grabbing tactics to answer our prayers. How easy it can be to miss God’s answer because we don’t hear what we expected. But we don’t need to understand the answer to believe it will work. Like Naaman, we just need to listen, follow, and let God do the rest.

Are you believing God’s simple answers to you?

Leigh DeLozier is a corporate writer/editor by day and a Christian writer, blogger, and book reviewer by night. She is the author of Work-from-home Moms’ Devotions to Go, Divas in Disguise: Finding the True Diva in You, and 3-Minute Devotions for Moms. She is a graduate of She Speaks, a member of American Christian Fiction Writers, and president of the Word Weavers-Conyers chapter. Leigh lives in Georgia, where she and her husband are adjusting to life as empty nesters while their cat attempts to solidify his rank as ruler of the house. Connect with her at www.AuthorLeighDeLozier.com and www.CleanFictionBookReviews.com.