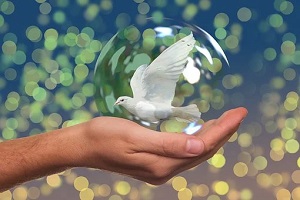 Lunch was almost ready in Wilmer McLean’s Virginia home in 1861 when a shell from the nearby battle of Bull Run suddenly dropped into the kitchen chimney, splattering the family meal.

Hours later, the house was shelled into destruction. Seeking peace away from any future battles, McLean moved his family to the distant Virginia community of Appomattox.

McLean reluctantly agreed, and the generals soon arrived, each with an entourage, to finalize the war in the front parlor. When the signatories were gone, so was the furniture—confiscated by visitors as souvenirs. Each of the two tables used to sign the documents ended up in museums.

Wilmer McLean couldn’t seem to escape an inescapable war. Although I’m not trying to avoid a war, sometimes I have ongoing, troublesome problems that seem as inescapable. And that’s because I’ve failed to let God show me His plans for the situation, making possible solutions seem ethereal.

My problem might be any number of things, but whatever it is, if I don’t get God’s input, then I end up being worried, anxious, and fearful. Subsequently, as I continue to ignore the Lord, forgetting everything and succumbing to my misery becomes tempting.

Paul tells his readers to press on and to pursue the prize, which is knowing Christ. If I’m to do that, then I must turn back to God, learn, and follow His plans for me. If sin is involved, then He’ll forgive me, guide me, and provide for me so I can resume my spiritual journey to recommence my work for Him.

What steps do you need to take to escape your war?