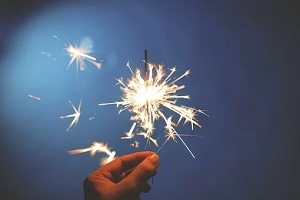 I sorted through family photos–the ones Mom kept in an old album in a drawer that showed a snaggle-toothed little girl swinging on a homemade swing when the world seemed carefree.

As I looked through the yellowed pages of the albums, what caught my attention was the pictures of Dad. He never seemed to smile. If anything, it was a half-hearted smirk. What I remembered was a dad that seemed happy on the outside but sad on the inside.

Then I found the source. An album of Dad’s days in the Army. He lied about his age to get into the Army, entering a year sooner than he should have. Within weeks, he was shipped out to do hand-to-hand battle in the Pacific Theatre during World War II. At seventeen, he was a gunnery sergeant, making decisions no seventeen-year-old should have to make and many times determining the lives of others. Dad suffered from PTSD and, sadly enough back in those days, the men who survived the battles suffered in silence when they returned home.

One year, my brother framed Dad’s medals as a gift. Dad smiled, thanked him, and then said, “You could buy these on the streets in the Philippines. There’s no pride in the freedom.” He was referring to the fact that locals would steal personal items off the bodies of dead soldiers and sell them on the streets. Anyone could buy a medal and claim to be a hero. It broke Dad’s heart.

Freedom had no meaning.

Paul wanted the people to know that through Christ the veil of the old law was lifted, and this new covenant of life was available to everyone. He reminded them the Spirit of Christ was with them and with that…so is freedom. What a message of hope. What a promise.

Dad came home from the war broken in many ways. His hurt stemmed not from his physical wounds but from the wounds of his heart. Was it worth the lives of his friends to know freedom was unappreciated–had no meaning?

Christ fought the earthly battle. Some might say He failed–Christ died. But we know it wasn’t a failure, for through that death we gained freedom. The promise stands strong.

This Fourth of July, remember the sacrifices, earthly and spiritually, that have been fought so you might have freedom.

Note to our American Veterans and currently serving men and women. Thank you for your service. Though the world seems to take for granted your sacrifice, never believe the lie. Your service, your time, and your sacrifice have great meaning. Thank you.