4 Steps to Get God's Help

For the eyes of the LORD range throughout the earth to strengthen those whose hearts are fully committed to him.  2 Chronicles 16:9a NIV 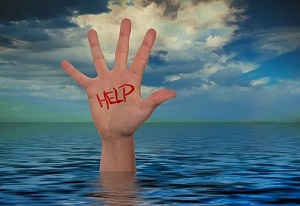 In life-threatening circumstances, to whom can we look for help?

Most people frantically search for someone reliable—perhaps a family member or friend. If they are desperate enough, they may look for anyone willing to help, even for a price. Instead, why not look to the Lord?

Here are four simple steps to get God’s help.

Realize and Admit Our Mistakes

In the Bible, Hezekiah, king of Judah, counted on an alliance with Egypt, Philistia, and Phoenicia to defeat the Assyrians, who smashed every kingdom in their path. This was a mistake, for they were ungodly and unreliable. The alliance didn’t help Hezekiah. All of Judah’s fortified cities were smashed by the Assyrians, except Jerusalem, the capital city.

Turn to God for Help

Hezekiah made preparations for an upcoming siege. That was his responsibility. However, sometimes our efforts are not enough. We need supernatural help. Hezekiah called on his God, the one true Sovereign of the universe.

Have Confidence in God and Do Not Be Dissuaded

In contrast to Hezekiah’s confidence in God, Sennacherib, king of the Assyrians, was confident in his abilities. He was arrogant and had a misconception of Israel’s God. To him, Judah’s God was no more powerful than those of other nations he had conquered. Israel’s God had not saved the northern kingdom of Israel from his destructive hand or any other fortified cities of Judah. Why should He deliver Jerusalem?

Regardless of who or what causes us severe anxiety, if we are living a righteous life, the Lord is on our side. And one plus God is a mighty majority.

How can we know we will get God’s help? We must seek His glory. The Lord is delighted to answer those seeking to please Him.

In one night, the angel of the Lord destroyed 185,000 Assyrians as they slept. Humiliated, Sennacherib returned home. Later, his sons assassinated him. Through this victory, God received the glory.

No one is more powerful than the Lord Almighty. Will you trust Him?

Rodney Harrier is a committed Christian, husband, and father of four adult children and two grandchildren. He has a teaching ministry at https://www.chronologicalbiblestudies.com. His mission is to help ordinary people understand the Bible and apply it to their lives.