For I know the plans I have for you, declares the Lord, plans to prosper you and not to harm you, plans to give you hope and a future.  Jeremiah 29:11 NIV 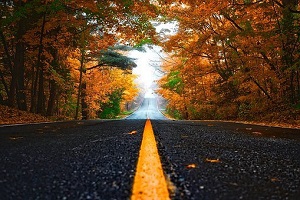 As we crossed the high peaks of Northwest Georgia's lower Appalachians, the sun caressed the yellow, orange, and scarlet red of this year's autumn foliage.

The leaves were beautiful. Along the side of the road and in the fields beyond, suddenly bright orange pumpkins were everywhere. It was early in the last week of October, and my wife, Charlotte, and I were returning from our annual week in Alpine Helen, Georgia. Every year we attend the Oktoberfest there, one of the best and longest in the nation. Charlotte is Bavarian-born, and our annual visit is a way to embrace the heritage she left behind in Germany.

Almost every year, the same phenomenon occurs. We leave our home in middle Tennessee with the trees still clothed in late summer olive-green and return a week later with those same trees ablaze with the fiery colors of fall.

Although man's calendar says autumn started on September 22nd, nature's symbols of fall don’t begin to appear here until the last week of October. We have yet to see the first frost or freeze, and it's barely gotten cool enough at night to smell the familiar smell of woodsmoke wafting from the scattered chimneys on our Tennessee ridge top.

Man's constant, desperate attempt to control his God-given natural world exhibits itself in many forms. Once, we managed to build civilizations simply on the sun's rising and setting, but soon we subdivided those daylight hours with sundials and hourglasses. Mechanical timepieces followed, and Benjamin Franklin first suggested daylight-saving time.

Man took the natural seasons and assigned artificial start and stop dates. We start celebrating fall at the beginning of September, but it’s nearly November before the first pumpkin appears hereabouts. God moves on His schedule, not by any measurement of man.

In our personal lives, too, God has plans for us. He had a plan laid out while we were still being knit together in our mother's womb. But we must seek out that plan through His Word and His Spirit. More importantly, we must let go of the steering wheel as we discover that plan and let God drive the car.

As a little boy, I wanted to be a preacher. Okay, it was because I thought they just worked one day a week on Sunday, but still, the passion was there. As I grew older, I rebelled, choosing the carnal over the spiritual, and then spent years paying for that rebellion.

Have I fulfilled God's plan for my life? Sadly, I don't think so. I have God-given gifts I don't use enough for His glory. Thank goodness I can hold Jesus' hand and hide behind His forgiveness when I have to stand before God on Judgement Day.

Are you seeking God’s plan for your life in His wonderful written Word? Are you listening to His Spirit? Are you fulfilling His goal for you? Jesus said to seek His kingdom and righteousness first, and then He would add everything else.