We will not hide these truths from our children; we will tell the next generation about the glorious deeds of the Lord, about his power and his mighty wonders.  Psalm 78:4 NLT 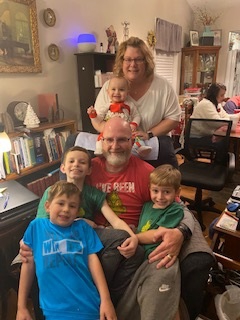 “Come on. Let’s read the Christmas story so we can open presents.”

I pulled out the old Bible that had belonged to my great-grandmother—so ragged that the cover had long since disappeared—and read from Luke 2.

Year two. I took out my grandfather’s Bible. It was in a little better shape. Once again, I flipped the aged pages to Luke 2. By now, everyone knew what story I planned to read.

Year three. I removed one of my dad’s Bibles from the bookshelf, opened it to Luke 2, and once again, read the story to my family. But this year, I did something different. I told them how Jesus was a carpenter and so was my dad—their Papa and great-Papa. When I finished, I had the oldest grandson present give a gift to his mom and uncle. Inside were wooden food trays their Papa had made. Then I gave each grandchild knives and tie tacks that had belonged to the great-Papa. I passed on something of worth to them.

The psalmist planned to pass on the story of what God had done in his life and the life of his ancestors. This included a personal relationship and God’s saving actions in their history.

Although our family heritages differ—some we may not be proud of, know of, or even want to remember—we each have one. And there is something good in them that we can pass on if we look hard enough. Even negatives can become positives with the right perspective. Our children and grandchildren need to hear the stories.

More important, is the spiritual heritage. What the psalmist planned to pass on. Hopefully, we have a rich one of those as well. But even if we don’t, we can start with ourselves and pass on ours. Our children and grandchildren need to hear what God has done in our lives. Then, they will be encouraged that He wants to do the same in theirs.

What are some ways you can pass on your heritage?

(Photo courtesy of the author.)