So then, just as you received Christ Jesus as Lord, continue to live your lives in him, rooted and built up in him, strengthened in the faith as you were taught, and overflowing with thankfulness.  Colossians 2:6-7 NIV 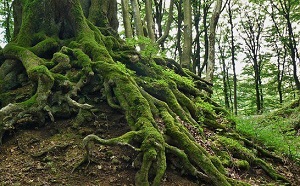 I once moved into an apartment housed on the second and third floors of an older, neglected house.

The new owners planned to restore the house and property. As I watched the exterior work being done in phases, I had hoped that some of the trees would remain. Two old apple trees still produced fruit. One particular tree, small and weak, had demolition done around it. Into the third summer—and with most of the demolition done—this tree had only produced a limb for my wind chime and some shade for the birds using the birdbath and feeders.

But by the next summer, the tree took off, and, since I had to trim the low-lying limbs so I could watch my birds, I witnessed fruit form on the branches for the first time since I had moved. The height and width of the tree doubled, and walnuts appeared. Obviously, the roots had taken hold, and the tree continued to soak up what nourishment it needed. It held on and thrived.

We, too, must stay rooted in God’s Word and build ourselves up in His strength. We need to study the Bible, pray for wisdom to practice its teachings, and use our minds as a tree uses its root system to reach deep and soak up what is needed to grow.

What are some ways you can feed on deep-rooted understandings of God’s Word?

Melissa Gween Meek is a searching Christian, using the Word and writing devotionals to deepen her faith. Through her life experiences of losing a spouse and experiencing health struggles, she aspires to help others through her love for putting words on paper. You can find her on Facebook where, for more than three years, she has written a weekly message for Schneider’s Life Group. https://www.facebook.com/Schneiders-Life-Group-369898700010859.