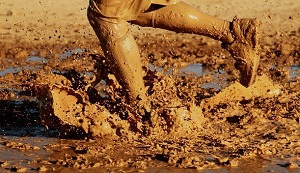 Before us was a wide river; behind us were miles of unmarked territory.

Panthertown Valley in North Carolina was the most confusing place I had ever hiked. Numerous trails meandered across hundreds of acres, but none were marked. Maps didn’t seem to match the actual outlay of the areas, and several side trails veered off from the main trails, making following the map even more confusing.

On one hike, my brother, son, and I chose a route we’d not taken before. After hiking several miles, we came to a bulging river. None of us could swim, and we weren’t sure we could return the way we had come. While the water wasn’t raging, we wondered if it was deeper than it appeared. My brother decided to be the guinea pig and made it safely across. My son was short; I’d have to carry him. So, with a child on my back and a hiking staff in my hand, we traversed the cold water and luckily made it to the other side.

God’s Old Testament people had been through deep and muddy waters more than once. In their history, wave after wave of foreign invaders attacked them and, on several occasions, carried them away as captives. But each time, God delivered them.

Like the nation of Israel, I can recount an entire list of muddy water episodes: rebellious children, dying relatives, financial meltdowns, broken relationships, unemployment, low-paying jobs, abuse, cancer, and physical ailments. And if I haven’t faced the muddy waters myself, I’ve been close to someone who has.

God never gave up on the nation of Israel. He always came to their rescue. He’s done the same for me. Just as I couldn’t see the bottom of the river we crossed, so I’ve not been able to see the bottom of the muddy-water episodes I’ve encountered. But it doesn’t matter. I knew the One who allowed me to cross through the waters, and He had a reason for doing so. The lessons I’ve learned resulted in spiritual growth. And God has given me many opportunities to share my lessons with children, teens, and adults. I’ve also noticed that people traversing muddy-water episodes listen more carefully to someone who has been through the muddy waters themselves.

When God takes you through muddy waters, enjoy the journey, be open to what He’s trying to teach you, and then help someone else through their journey.