Hilkiah said to Shaphan the court secretary, “I have found the Book of the Law in the Lord’s Temple!”  2 Chronicles 34:15 NLT 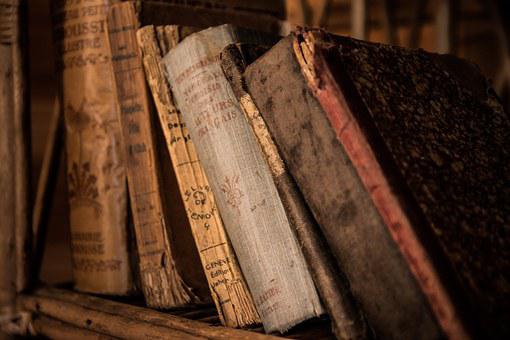 I am a connoisseur of old books.

In the spare bedroom of our small patio townhome, bookshelves rest against the walls, encircling the area where bedroom furniture should reside. The square footage is small, and I want to display my treasures. I’ve put much time and energy into collecting these books—most of which boast a copyright date before 1940.

The oldest ones I wrap in cellophane paper to preserve the covers. Some of the books are in great shape, considering their age. My oldest book is two hundred years old, came from a Charleston, South Carolina, library, and has no scratches, mildew, or tears.

Many of the books have content that doesn’t interest me—but their condition and covers intrigue me because they have survived so long. The covers aren’t dull like so many modern-day books. Some have intricate designs and carvings, such as a sculptor would place on his work of art—no mass production.

I have only read a few of my old books. Most just sit on the shelf. Thumbing through the pages would probably loosen them from the spine and even separate the cover. But none mimic the book Hilkiah discovered.

One of young King Josiah’s projects, when he took over the throne, involved restoring the temple, which had fallen into disrepair. In the cleanup, Hilkiah discovered the Book of the Law. When the king read God’s Word, he repented and led the people to do the same. They had disobeyed God. Surely, punishment marched on the horizon.

We can discover tidbits of truth in many places, but only the Bible hosts complete, absolute truth that never changes. The words held truth when God first spoke them through the various writers, and they still contain truth.

When truth confronts us, it always calls for change, as it did with the king and his subjects. God’s Words leads us to repentance, confession, and sorrow. But it also leads us to joy, peace, encouragement, and abundant life. No other book can change us as God’s Word can because God’s Spirit has breathed no other book.

Make it a point to spend time in the best book. Doing so will change your life.