The Sacrifice of Christmas

Though He was God, He did not think of equality with God as something to cling to. Instead, He gave up His divine privileges. He took the humble position of a slave and was born as a human being. When He appeared in human form, He humbled himself in obedience to God and died a criminal’s death on a cross.  Philippians 6:2–8 NLT 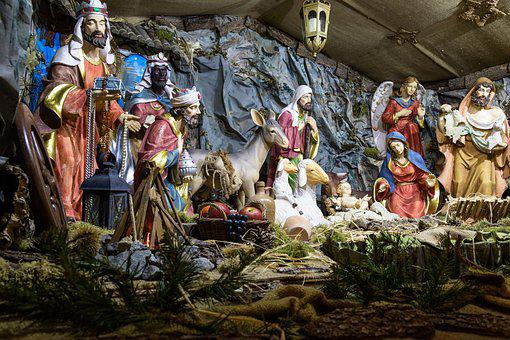 It’s time once again to celebrate the sacrifice of Christmas—the birth of Jesus, born into this world in the worst of circumstances. No one would have chosen a lowly stable . . . dark, cold, and unsanitary.

But wait. Jesus did.

Try to imagine what I gave up when I came into your world as a baby. I set aside My glory so that I could identify with mankind. I accepted the limitations of infancy under the most appalling conditions—a filthy stable. There was nothing glorious about that setting. ~Jesus

Think about it. Jesus—all God—became man. He chose to humble Himself, leave the glories of heaven, and enter this world as a baby in a society where He would not be entirely accepted. He did this knowing He would grow up to be tempted, mocked, betrayed, beaten, and nailed to a cruel cross. He knew exactly what He would face, yet He willingly did it for us.

Jesus made the supreme sacrifice to redeem us. To save us from our sins. To restore a right relationship with the Father. He gave up His divine privileges. He took the humble position of a slave and was born as a human being. He humbled Himself in obedience to God.

This year as you spend Christmas with friends and family, remember the sacrifice Jesus made. Celebrate His birth, but remember He is no longer that babe in a manger. He is now our risen King of kings and Lord of lords.

Andrea Merrell is an award-winning author and professional freelance editor. She is an associate editor with Christian Devotions Ministries and Iron Stream Media and was a finalist for the 2016 Editor of the Year Award at BRMCWC and the 2018 Excellence in Editing award by the Christian Editors Network. Andrea is a graduate of Christian Communicators and was a finalist in the 2015 USA Best Book Awards and the 2018 Selah Awards, as well as a semi-finalist in the 2018 ACFW Genesis contest. She has been published in numerous anthologies and online venues, teaches workshops on writing and editing, and is the co-founder and regular contributor to www.TheWriteEditing.com, a blog designed specifically for writers. Andrea is the author of Murder of a Manuscript, Praying for the Prodigal, and Marriage: Make It or Break It. Contact her at www.AndreaMerrell.com.