For prophecy never had its origin in the human will, but prophets, though human, spoke from God as they were carried along by the Holy Spirit.  2 Peter 1:21 NIV 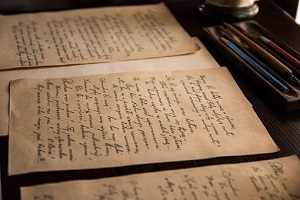 Letters. How old fashioned can you get? Why send letters when you can email or text? Not to mention posting on social media?

Believe it or not, letters are more personal. My first letter was from my grandparents when I was six, and I was excited the day I got it. I could hardly wait to rip open the envelop. And I won’t tell you about my first love letter.

The day came when my sons wrote me their first letters. They were simple and in the language of the country from where we adopted them. But they were sincere expressions of their feelings. They understood we had adopted them and that they were ours for keeps. While I am not that sentimental, I still keep those letters as reminders of where we have been.

I am sure the readers of the New Testament letters felt the same. The authors of these letters, (Paul, Peter, and John primarily), wrote to encourage believers in their faith. In many cases, Christians endured suffering because they did not conform to Roman paganism. Those letters reminded the readers of God’s grace, mercy, and peace and were so precious that the churches often circulated them among themselves to share the encouragement.

But the proof of the letters’ preciousness was shown by how often they were copied and because they were saved for over 2,000 years. People saw the value of sharing them with future generations. Now, we have them in the New Testament.

Rather than looking at these letters as something boring, ancient, and dusty, we should get excited when we read them, even though we may be accustomed to reading thirty-second emails or ten-second posts.

I finally realized there was a passion in these letters I couldn’t find in a short blurb online. Now, I am back to reading these letters in one sitting and enjoying every moment. They have become intimate and personal, just as they were always intended to be.