A Pure and Simple King 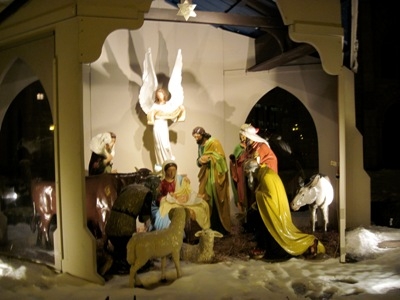 My cousin, a Hollywood camera operator, showed me around the studio set of the latest television show he was working on. The show was a popular sit-com, and the two leading actors were household names. He took my picture as I sat in the pretend kitchen, and we wandered around the adjoining sets: a bedroom, a café, a school hallway. While I enjoyed the tour, I kept wondering to myself: How are they able to make any of this look even half-way real when the show airs on TV? The sets seen up close were so flimsy and fake. To accept them as believable was giving in to an illusion.

But isn’t that what Hollywood is, a master of illusion? More, isn’t that how the world is, offering up its glamorous lies of wealth, power, and success as the “real deal,” when these things have no genuine substance to satisfy our souls?
I love how Jesus, when it was time for him to come into the world, was born not in a palace, but in a barn. I love how he made of himself an ordinary person who lived in a small town and worked as a carpenter. And how, when he wandered from place to place during his years of ministry, he had no place to lay his head, which means he may very well have spent many nights sleeping on the ground under the stars.

Jesus came into the world to save us from death, but at the same time, he showed us how to live. His goal was to do the will of God, to complete the tasks God had sent him into the world to do. That’s all. And for Jesus, that was enough. He never sought after power or wealth, or popularity, because he knew these things were only an illusion, a cheap imitation of what God wants to give us when we’re in right relationship with him.

My favorite Christmas decoration is my Nativity scene, with baby Jesus lying in the manger. God himself, wrapped in swaddling clothes and sleeping on the hay. It reminds me of what brings true joy in this world: humbleness, servanthood, self-sacrifice.

The world’s offerings of happiness are illusions. As tempting as they as to believe and pursue, choose instead to follow in the footsteps of the Christ-child, a pure and simple king.

(Photo courtesy of morguefile and speartoons.)

Ann Tatlock is a two-time Christy award winner. Author of eight novels and now entering the world of Children’s writing, Ann’s gentle and truthful word-weaving draws readers in and never lets them go. Ann is also a speaker and conference teacher. Visit her at www.anntatlock.com.