All who do evil hate the light and refuse to go near it for fear their sins will be exposed.  John 3:20 NLT 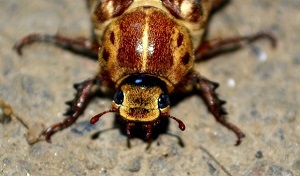 When the light came on, they scattered—and so did my grandmother.

Pest control companies existed in the 1970s, but Grandmammy refused to call one to deal with her roach problem. She and my grandfather didn’t want to spend money on such trivial matters. And the German cockroach wasn’t the only one invading her home. The Palmetto bug did too. A large bug more grotesque to her than the smaller one.

I watched with amazement at how she controlled her problem. When bedtime arrived, she turned out the lights and we headed for bed. But when she turned off the light switch, she didn’t move, nor did I. We stood in the dark for what seemed like forever.

Then suddenly, she turned the light switch back on. Somehow in the darkness, my grandmother had retrieved a stick broom. When light illuminated the room, roaches ran everywhere—and so did my grandmother, squashing every one she could with the broom. She repeated her actions several times before we retired to bed. I suppose she must have killed enough of them to satisfy her because she never called the exterminating company. And I don’t remember the roaches overrunning the house.

My grandmother’s roaches hated light as much as my grandmother despised them. Jesus said the same about evil. When light is around, it flees for fear of being exposed.

But evil doesn’t always run. Sometimes, it opposes in more than a secretive way. Jesus said His followers would endure persecution, even as He did. In the twenty-first century, the opposition against Christianity is increasing—in subtle and not so subtle ways.

When I choose to dabble in evil ways as a believer, the light of God’s conviction shines on me—and I don’t enjoy it. Yet God has a purpose in sending the guilt. He wants my confession so the relationship we have remains healthy. Instead of running from the light—as the cockroaches did—I need to run to God, or to others who will help me get back on track.

Staying in the light means I receive God’s guidance and wisdom for daily living, that I experience His forgiveness, that I garner encouragement, and that I live a life of abundance.

Don’t run from or oppose God’s light. He places it there for an important purpose.