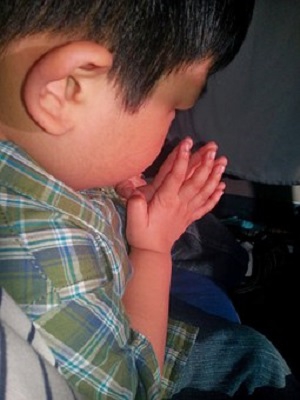 In 1937, on a sick bed in Caswell County, North Carolina, a seven-year-old boy lay dying of pneumonia.

Ladies in the neighborhood relieved his exhausted mother by sitting at his bedside through the night and wiping his fevered brow. Their efforts did nothing to slow the gradual strangling as his lungs filled with fluid.

Dr. Simpson came to see the boy twice a day. One day, he gave the family the bad news. Although drifting in and out of consciousness, the little boy heard the news, understood his condition, and in his heart prayed, “Lord, please don’t let me die. It would hurt my mother too much.”

When he was conscious, the boy repeated his simple prayer. One day, in the upper left corner of his darkened room, a light appeared and then a voice: “Stop worrying. You are not going to die. Go back to sleep. You need the rest.” A deep peace came over the boy.

When the boy next awoke, Dr. Simpson was back, and daylight filled the room. The boy heard Dr. Simpson tell his parents, “I don’t want to give you false hope, but his vital signs are a little better.”

Again the boy slept, and again he awoke to Dr. Simpson checking him. Late afternoon light filled the room. The doctor said to the mother, “I think we may be turning the corner.” The boy’s mother left the room so no one would see her tears.

As Dr. Simpson turned to pull the boy’s covers up, the boy touched his arm and said, “I’ll not die.”

Dr. Simpson bent low and said, “No, Bobby, you’re not going to die.”

The doctor started to rise, but Bobby wasn’t finished. “Last night, I prayed, ‘Lord, don’t let me die.’ And God said, ‘You are not going to die.’”

The boy’s strength vanished, and he collapsed back into his pillow. Dr. Simpson leaned closely. “Bobby, you keep talking to God. He is a better doctor than I am.”

Bobby did, and through his recovery from pneumonia and multiple surgeries as a teenager to recover from the devastating effects of polio, he kept talking to God. And God kept answering. I know, because Bobby is my father, Robert Eudean Spencer  And on Tuesday,  March 26th, he celebrated his 89th birthday.

God listens. Put your cares before Him, and listen for His answer.