Penned for a Purpose

I don’t really understand myself, for I want to do what is right, but I don’t do it. Instead, I do what I hate.  Romans 7:15 NLT 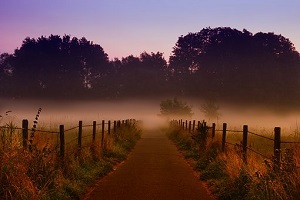 He had all the room he needed, but it wasn’t enough.

I lounged on my grandparents’ wraparound porch in Vance, SC, enjoying a summer afternoon and looking out over the open fields and forests that surrounded their home. In his earlier years, my grandfather had raised cows, but now he kept hogs. His hog pens encompassed acres of land. Enough that any pig should have been satisfied.

As I relaxed, I noticed one swine saunter to the fence, insert his long snout under the bottom, raise it up, and slither underneath. I hollered for my grandfather, who quickly corralled the wayward animal. But I wondered why the hog wanted to get out. He had more than enough space. What made him want to enter a field much smaller than the one in which he was penned.

My grandfather put his hogs in a pen for a reason. Had he not, they would have wandered into fields where he had crops planted or run into a nearby highway and risked death. But they didn’t appreciate his efforts. They wanted what they shouldn’t have.

Paul had a similar problem. He didn’t say humans have an animal nature, but we do share at least one common characteristic: we want what God says we can’t have. Paul didn’t understand himself, just as I didn’t understand the hog’s actions.

I admit I’ve experienced Paul’s dilemma. God says, “Don’t do _____,” and that’s exactly what I want to do. The pen restricted, but the hog wanted the restriction removed.

God’s boundaries have purpose. He doesn’t give the “Thou shalt not’s” to make our lives miserable. Just as parents and teachers have a purpose in setting boundaries for children—and just as Pappy had a purpose in erecting a fence—so God has reasons for restricting our behavior. Love is always His purpose for whatever pens He pens us in.

God knows danger lurks beyond the fences He erects. For the hog, it could have been death. For me, it might be sins that would ruin my testimony and my effectiveness in God’s service, habits that would eat away at my health, or unwise decisions that would take me down a path God doesn’t want me to walk.

God pens us for a purpose. Respect the boundaries and know He builds them out of love.