And he took bread, gave thanks and broke it, and gave it to them, saying, "This is my body given for you; do this in remembrance of me."  Luke 22:19 NIV 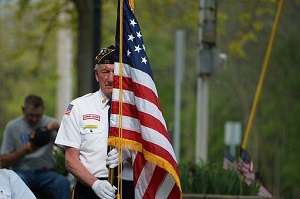 A hush washed over the crowd like a gentle ocean wave.

We leaned through the people, toward the oncoming parade to see what caused the sudden quiet. A color guard marched past. We were amazed that it consisted of two WWII vets and even a Marine from the Korean War, but what changed us in a moment was an Army vet slowly lumbering a step behind, dragging his rifle, eyes fixed on the ground. He wore his fatigues and a leather jacket that harbored red embroidered words, VIET NAM. Beneath the letters, boots and a helmet lying at the foot of a white cross.

Actions are louder than words, and his spoke with great clarity. Broken and sad, the vet marched in memory of his forgotten, fallen friends, reminding everyone of a group of men who’d given their all and yet were shunned.

Christ knew what awaited Him as His days wound down. He understood what it was like to be shunned, to feel a lack of appreciation. Jesus wanted to set a memorial in place that exemplified His Father’s love. He broke the bread and told them, “Do this to remember me.”

That was the important thing … remembrance of Christ, His sacrifice, and the gift that came from it. The ministry of Christ wouldn’t be forgotten. He willingly stepped into the throngs of torture and death to save us. That brought us salvation, redemption, and the promise of eternity.

I can’t watch a veteran pass without tears rising to the surface. It takes my breath to think that without hesitation these men and women stand in the gap to protect me. I rarely let a vet pass without thanking them for all they have done, be it at the airport or the grocery store. For those who have given it all—it’s right and fair we remember their sacrifice, just as we remember the ultimate sacrifice made by God’s only Son.

This Memorial Day, remember the soldiers who willingly sacrificed all they had so we might be free. Then go to your knees and give thanks for the ultimate sacrifice that brings us eternal life.

“Do this in remembrance of me.” ~ Jesus Christ