Hope deferred makes the heart sick,  But desire fulfilled is a tree of life.  Proverbs 13:12 NASB 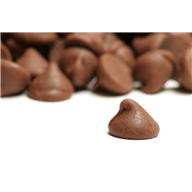 Who hasn’t tasted a piece of Hersey’s chocolate as it melts in your mouth? Most of us have. In 1876 Milton Hershey started a candy business in Philadelphia, but despite six years of hard work, it failed. He moved to New York City and started another business based on caramel. It failed. He moved back to his native central Pennsylvania and started another caramel-based business. This time it was successful and the Hershey Chocolate Company was born. He used the proceeds from this enterprise to perfect (taking years of trial and error) a process for making milk chocolate and mass-producing it. And the rest is history.

What if Milton Hershey had stopped after his first or second failure? The world would never have known the Hershey’s Kiss, not to mention many acts of philanthropy. He would have died an obscure and unknown man. Had Abraham not persisted in believing God past the biological possibility of conceiving the son of the promise, the history of God’s people might have been different.

If you have been a believer very long, no doubt you’ve had experiences where heavenly vision did not translate into an earthly reality. You were sure you heard from God, but the promise from Him did not seem to come to fruition. It’s possible you just misread God, but it’s more probable you assumed God’s timing for its fulfillment. The promise may have been genuine, but you assigned a time for God to act based on your circumstances, for what seemed reasonable to you.

As we read the Bible, we can see God’s timing does not always coincide with ours. Many people, just like Abraham, had to wait—humanly speaking—past realistic periods of time to receive the promise. After years of waiting, Abraham probably assumed it was all over. But things are never over until God says they’re over.

How will your life be different if you continue to believe God in spite of failure, disappointment, and delay? Trust in the hope and promise of Jesus, and you’ll soon see it’s not over. . .it’s better.