All of the French Fries

I have no need of a bull from your stall or of goats from your pens, for every animal of the forest is mine, and the cattle on a thousand hills.  Psalm 50:9-10 NIV 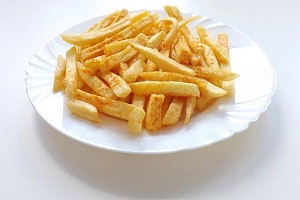 When Mark’s children were small, he took his oldest child, Caleb, to lunch at a fast food restaurant.

Without hesitation, Caleb ordered his favorite meal: chicken nuggets and French fries. Mark divided the food, giving Caleb his fries and nuggets. Then they asked God’s blessing on their meals and began to eat. Mark hadn’t ordered French fries for himself, so during the meal he asked Caleb if he could have one of his fries.

Caleb said, “No, Daddy, these are all I have.” His father assured him they could order more, but Caleb stood firm. Twice more Mark asked for one of Caleb’s French fries, but Caleb refused to comply. They finished their meal, and Mark left frieless.

Mark asked his son for fries because he wanted Caleb’s love. He hoped Caleb would offer him a French fry because he loved him.

We can act as Caleb did. God owns all of our “French fries,” and we have them only because He gave them to us. He doesn’t need our money because there’s nothing our money can buy that He can’t provide for Himself. If He wanted our money, He is strong enough to take it, rich enough to buy more, and wise enough to make it stretch.

God wants our love. He wants us to share our last French fry because we love Him that much. And if we run out of French fries, He’ll buy us more because He loves us as no one else ever has.

God owns all the cattle, all the money, and all the French fries. Trust Him. Share with Him because you love Him. He won’t leave you hungry.

Dory Oda is a freelance writer, recently retired after enjoying two disparate careers. Her experiences as a classroom teacher and later as a mortgage banker, provide a varied and colorful backdrop for her writing. She lives in Indiana with her husband, Mike, and their cat, Molly Mae. Dory’s works include three devotional compilations on topics of Bible characters (Really, God?), nature (From My Backyard), and devotionals for bedtime (Night Song), as well as various works of poetry, short stories, and essays.