A Hug Sent from God

Blessed be God, even the Father of our Lord Jesus Christ, the Father of mercies, and the God of all comfort.  2 Corinthians 1:3 KJV 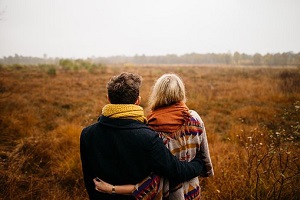 Depression tried to set up squatter’s rights in my mind.

When I entered the hospital for surgery, I expected only an overnight stay. Following surgery, however, I developed a large blood clot. Then, my heart went out of rhythm and my lower lungs collapsed. My planned overnight stay became a week. The stress on my mind and body took its toll.

When my daughter, Jean, visited me, the floodgate opened, and the tears rolled down my cheeks. She wrapped me in her loving arms and encouraged me, “Get it out.”

After telling my cousin, Janet, what Jean had done, she exclaimed, “Oh, that’s just what I prayed for. I asked God to reach down and give you a big hug.” God used Jean to answer Janet’s prayer.

The first line in a poem by Annie Johnson Flint reads, “Christ has no hands but our hands to do His work today.” Sometimes, we are not willing to be God’s comforting hands because we think we don’t have time.

Colleen was one of those people. She was busy when an inner voice said, “Go visit Bertha.” The experience was so real that she answered, “I will not!” But when the voice nudged her once again, she realized God’s Spirit was speaking, and she obeyed.

Bertha was a lonely older woman who didn’t think anyone cared for her. Colleen was able to assure her this wasn’t true. The following week, Bertha was seriously injured and spent the remainder of her life in a nursing home, unable to communicate because of a brain injury. Colleen was thankful she had obeyed that inner voice and responded by being the hands of Christ.

God wants to use us, but we must be willing to follow His leading. It may be something as simple as giving a smile to a tired cashier or driving a senior citizen to the doctor. Perhaps, like my daughter, God will send us to give encouraging words and a loving hug.

As God comforts you, pass along His love and comfort to others.