What We Do for Freedom

It is for freedom that Christ has set us free. Stand firm, then, and do not let yourselves be burdened again by a yoke of slavery.  Galatians 5:1 NIV 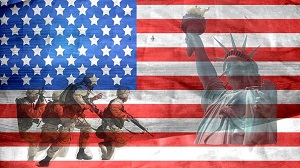 His story broke my heart.

I met him at a local park when my boys were tiny. He was leaned back on his elbows, watching his little girl play on the swings. I sat on a blanket spreading peanut butter on bread. I noticed him staring from time to time, and when I finally smiled he turned away. When I called the boys over for lunch, his daughter tagged along.

“Would you like a peanut butter sandwich too?” I asked.

The man quickly jumped to his feet to retrieve his daughter. “I’m sorry,” he said.

“Not a problem. I have plenty. You want one too?”

The man smiled and took the sandwich. Dressed in fatigues with holes, I eyed a tattoo that resembled an Army design with three names listed under it: Peterson, Johnson, Tomblinson.

“Nam Veteran?” I asked. “Thanks for your service.”

He stared hard at me before he asked if he could sit.

“More than I care to admit. Lost my three buddies there. I couldn’t pull them outta the hole before a bomb hit. I tried.” Tears formed in his eyes.

“Are those your friends?” I asked, pointing to his arm. He nodded. “They were dear friends … brothers?” He nodded again.

“They know you tried. Brothers know. You’re here to tell their stories.”

Freedom always comes with a price. Christ stepped into harm’s way to take the brunt of the consequence for our sin and paid the price. He did it so we would have freedom and no longer be slaves to sin. It was an act of love, freely given.

Tad sacrificed too. He told me their stories. How he dove into harm’s way to save his friends. How they fought to protect our freedom. He, too, freely gave.

This July 4th, take time to offer your love and gratitude to the Christ who broke the chains of sin’s slavery for you. And while you’re at it, offer a prayer of peace and thanksgiving for those who freely serve our country that we might have this freedom.