The Lord is good, a refuge in times of trouble. He cares for those who trust in him.  Nahum 1:7 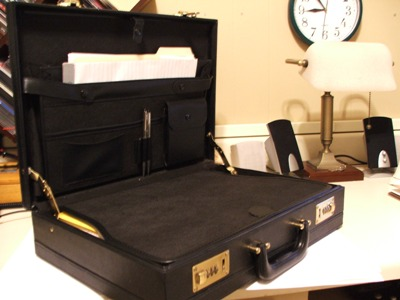 A man was having serious problems. His wife had left him, leaving their three children in his care. He was in the army and his responsibilities were many. Not only was he doing his work, but he was also the sole caregiver to his children.

He talked with his chaplain, who tried to encourage the man to allow God to work in his problems. “I can’t do all that is needed. I give up.”

So the chaplain decided to try a show-and-tell lesson. “Here, hold my briefcase. It’s heavy and the load is too much on my arm,” the chaplain said.

The man looked at him rather strangely, but he reached out to take the case. When he did so, the chaplain pulled it back. “Please,” the chaplain again asked, “Take this heavy briefcase. It’s such a heavy burden.” Again the man reached for the briefcase only to have the chaplain pull it back.

“I can’t help you carry the briefcase if you won’t give it to me,” said the man.

Then the chaplain made his point: God wouldn’t take the soldier’s burdens if he wouldn’t hand them over.

Are we ever guilty of doing the same thing? When our burdens are heavy, do we ask God to help us with them but then pull them back and take them up once again?

Scripture tells us to cast our care on the Lord and He will hold us up – sustain us. He promised never to let us fall. We aren’t promised that God will take our problems away, but we are promised He will uphold us and keep our problems from defeating us. We simply have to be willing to let go before God can relieve our burden.

Trust God to be your refuge. Give your burdens to Him.