God is our refuge and strength, an ever present help in trouble.  Psalm 46:1 NIV 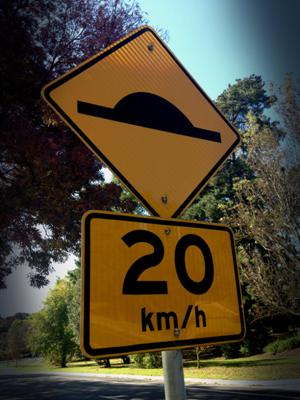 Most of us have encountered speed bumps while driving. They are intended to slow the speed of drivers, and they work well. However, they can be a challenge and a frustration.

Many of us have experienced other kinds of speed bumps in our lives. Just when it appears life is going smoothly, we become aware we are approaching another speed bump. No matter how hard we look for a detour around these troubling obstacles, there is no way to avoid them.

Mark learned about life’s speed bumps. He had served time in prison for offenses committed while on drugs. Once released, doors opened for him to have a job and life was good. He became a Christian and grew spiritually. He lived and worked in a large city during the week, but he returned to his home in a small town on the weekends.

One Friday evening, Mark was stopped because a taillight on his car was not working. The arresting officer ran a check and found there was an outstanding warrant for Mark’s arrest. The offense dated back seven years and involved Mark fleeing from the police when he was under the influence of drugs. His attorney had failed to check his records thoroughly and the charge remained on the books. Although his life had turned around since that time, Mark was punished for his past life. He had hit a huge speed bump and it put his life on hold while attempts were made to free him from jail.

Since Mark was a new Christian, his faith may have been shaky as he looked at the circumstances around him, but he continued reading the Bible and praying. After being in jail a few days, Mark was released and the charge from the past was dropped. The arrest was a speed bump that slowed him down, but God brought him over the rough areas and back onto a smoother road.

When we become discouraged over illness, heartaches, job loss, or other troubles, we can be assured we never have to face these things alone. He is our refuge. The one we can go to in hard times. He promises to be with us. We simply have to remain faithful and trust.

When you hit a bump, trust in the Lord. He will travel the roads with you and bring you safely over the speed bumps.

(Photo courtesy of morguefile and diannehope.)