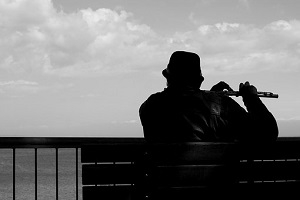 Shoppers hurried into the mall to escape the winter winds.

One man ambled towards the entrance, methodically tapping his cane. He pulled a flute from his tattered jacket and played Christmas melodies. Passersby scarcely noticed him. A mother dropped a coin in the overturned hat. A teenager handed him a water bottle. It was my chance to talk to him.

“Does anybody ever take your money? You wouldn’t know seeing as ...”

“I sees them with me ears. They can have me coins. I play ’cause I want ’em to have a song in they’s heart like I’s got in mine.”

As the flutist played “Mary’s Song,” I felt a warmth erase the wind that whipped onto the sidewalk from the nearby alley.

I learned something that day. Although the gentleman was blind and poor, the song of the Lord residing within gave him a joy no one could take. Rather than worrying about his circumstances, he focused on expressing the song within his heart.

Like the flutist, Mary had a song in her heart no one could steal. Her song, “The Magnificat,” declared her faith. She sang about her surprise to learn God had chosen her to birth the Savior. She glimpsed the impact of Christ’s birth—that it would bless generations. Expectantly, she sang about God’s sovereignty.

Mary reminds me of the flutist. She knew she’d have a difficult journey, but she kept a song in her heart when challenges came. As gossip mongers publicized her premarital pregnancy, she kept singing. When she and Joseph fled from wicked King Herod, I imagine Mary whispered lullabies into her child’s ears. As her Son lay upon the cross, beaten and dying a horrible death with His blood pooling at her bended knees, I am certain Mary had at least one chord from her Spirit-song residing within her wounded soul. But when Jesus arose, the whole world sang, as did Mary.

Christmas is a time to resurrect the song of the Lord that He’s placed within you. Listen closely. The Great Flutist has written a melody on the recesses of your heart.