Drop to Your Knees 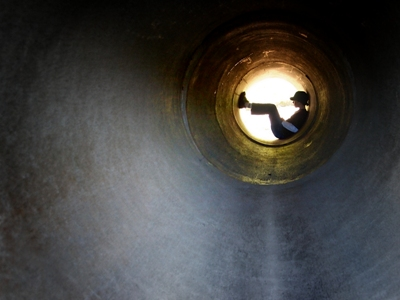 During fires, our instinct is to run, but we are advised to crawl to evade the smoke. If we remain upright, we risk becoming disoriented by smoke … and falling.

Sensory tunnels provide children with sensory processing difficulties and heavy resistance and input to their muscles and joints. As an occupational therapist, I often use this device with my students, who like crawling through it repeatedly. I use hula-hoops to make it easier for students to grab and hold the tunnel open for their partners, though they often let go, rushing to take a turn.

The Canaanite woman cried out to Jesus on bended knees. She had flailed in the darkness by her association with the most notorious of Israel’s pagan enemies. Jesus asked if it was right to take food from children to give to the dogs. The woman replied that even dogs were allowed to eat crumbs that fall from the table. In spite of her past, the woman’s faith led Jesus to answer her prayer and heal her daughter. Jesus used the term dogs metaphorically to imply he had a higher obligation. However, the woman’s faith was commended and compared favorably to His disciples.

So many times, I’m rushing to get something done and misstep. I panic and flail about when all I need to do is stop, drop, and take it slow. I am grateful for the times when I’m blinded by my ambition and forget everything I do is for the glory of God. I am nudged to drop to my knees and follow the light to get back on the right path.

The Lord reminds us He gives rest to those He loves and that it’s useless to rush through life with busyness.

Prayer: Lord, thank you for your gentle hand and showing me the way.

(Photo courtesy of morguefile and wintersixfour.)

Stephanie Menendez is an occupational therapist, writer, and Kidslife Sunday school teacher at First Baptist Church in Ofallon, IL. She lives in Fairview Heights, IL. Stephanie is a widow and takes care of her elderly mother and two fur babies (dogs). She is currently working on her first novel for middle graders under the name of Aunt Steph.