The Eyes of God

For the eyes of the LORD range throughout the earth to strengthen those whose hearts are fully committed to him. 2 Chronicles 16:9 NIV  Romans 8:28 NKJV 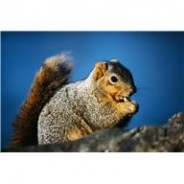 My husband built a bird feeding station just off the patio that attracted numerous birds, all colors and sizes. We enjoyed watching the birds pick at the food in the birdfeeders and dip into the birdbath. New species appeared almost daily—bluebirds, cardinals, red-headed woodpeckers, finches, blue jays, sparrows, ravens, orioles, doves, humming birds—all flashing their gorgeous array of colors as they flitted back and forth from the feeders to the trees.

In the fall a squirrel or two usually showed up looking for food to stash for the winter. My husband decided to add a feeder for them as well and almost immediately, a mother squirrel and her baby showed up. We watched as the mother cared for and nurtured her young from a distance. At first, she accompanied the young one to the feeder, but soon I noticed she sent him out to the feeding station alone while she stationed herself atop the six-foot fence and watched.

While she seemed to be far away from the little one, she never took her eyes off him. At the slightest sense of danger, the little squirrel skittered to his mother on top of the fence. They scampered down the fence toward the woods and disappeared from sight. Later he came back to eat, and when I looked over at the fence, there was the mother squirrel waiting and watching.

It occurred to me that God cares for and watches over us just as the mother squirrel watched over her young. Sometimes it may seem like He’s far away or isn’t paying attention to what’s going on in our lives, but He’s always watching, waiting to act the moment we are in need and seek His help. While He sometimes allows us to wander to teach us lessons in life, He never leaves us. His love and grace are without limits, from everlasting to everlasting, and we can run to Him any time we need him. He never takes His eyes off us. He’s just a prayer away.

Take time right now to thank God for watching over you even when you aren’t aware that He’s there. Learn to trust in Him and His watchful eyes.

Ann Knowles is a freelance writer, editor, speaker and the owner of Write Pathway Editorial Services in Wilmington, NC. She has published one book and numerous articles and devotions in print and online. She is a staff writer for Christ to the World Ministries, writing biblical dramas that are broadcast in 32 languages around the world. Her passions have always been missions and teaching. After 33 years in education, she continues to teach and speak at writing conferences, as well as church events, women’s groups, and civic organizations