Others are like the seed planted in the good ground. They hear the teaching and accept it. Then they grow and produce fruit?sometimes thirty times more, sometimes sixty times more, and sometimes a hundred times more.  Mark 4:20 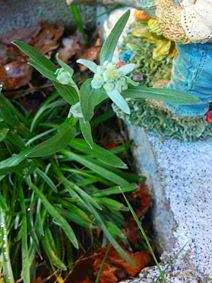 There were six of the tiny leafy green things, looking more like someone had dropped green paint on the potted soil than actual living plants. They were wrapped in thick plastic, in a container the size of a size thirteen shoebox and delivered by UPS. The brown-dressed delivery man gave me a conspiratorial wink as I electronically “signed” for the plants. I have no idea why he thought I would actually be signing my name for something worthy of a conspiratorial wink, but I smiled back at him, giving him something to tell his wife about over supper that night.

What I had, in fact, were six very small Edelweiss plants shipped by air from Germany. They were a birthday present for my Bavarian-born wife, Charlotte. I knew she would be delighted with them. Whether she could get the Alpine Mountain plants to grow in Tennessee soil—and survive a Southern summer—was another story altogether.

Charlotte, with her typical Teutonic efficiency—once she wiped away the birthday tears of delight and surprise—set about to read everything available online about the care and feeding of the fragile plants. She decided to try three different locations, two tiny Edelweiss seedlings to a site. And so for the next two years, summer and winter, we watched the delicate plants. One after the other, four of the seedlings gave up the ghost and died.

But the last two, in a site with more shade than sun, had a protective wooden border that Charlotte used to cover the plants with leaves to get them through winter. Much like they survived their native Alpine Mountain winters under a protective bed of snow. Of the two remaining  plants, one grew slowly, holding its own in a strange soil but seemingly uncertain of its surroundings.

But the sixth plant embraced its home and flourished. It has grown steadily over the past two years, climbing to almost a foot tall.  And a few days ago, to Charlotte’s teary-eyed delight, her Edelweiss finally bloomed. The delicate white blossom in a strange soil—and in a stranger climate—had opened against all odds.  And just to show that our Father always has perfect timing, Charlotte’s Edelweiss bloomed on the very day that she herself—51 years ago—had first come to the United States.

As Jesus taught us, our Father’s Word works in exactly the same way. We plant it in our heart, nurture it, water it, and pray over it … and the Word grows and blooms in us. As the song goes: “Blossoms of snow, may you bloom and grow, bloom and grow forever …”

Nurture your seeds of the Word so they will bloom and grow … forever.