The Value of a Penny

But a poor widow came and put in two very small copper coins, worth only a fraction of a penny. Calling his disciples to him, Jesus said, "I tell you the truth, this poor widow has put more into the treasury than all the others."  Mark 12:42-43 NIV 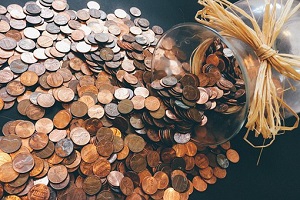 Stepping over the threshold of the restaurant, I spied a shiny penny.

After reaching down to pick it up, I noticed not just one, but thousands of real pennies. The builder of the establishment had used pennies, some shiny and some not so shiny, to tile the entire floor of the entryway. I thought, What a waste.

When I was a child, I bought penny candy at the country store near my grandfather’s house. I wore penny loafers in the fourth grade. I kept a piggy bank in my room, and I took great pride in making frequent deposits. My parents always advised, “Save your pennies!” They also often asked, “A penny for your thoughts?”

I believe in the value of the penny, literally and metaphorically. People who donate their pennies to organizations such as Fellowship of the Least Coin and Pennies for Peace help provide meaningful services to impoverished people throughout the world. These small but heartfelt donations are pennies from heaven to people in need.

The widow who gave an offering of two small copper coins made a big faith sacrifice. Those two coins were all she had to live on. In contrast, the scribes and Pharisees gave what they did not need. When Christ said she had given more than all the other contributors, He used her kind of sacrifice as an example of the type we should all be willing to make for Him.

Focusing on cost rather than value is tempting. Living in a throw-away society, we often place more value on possessions than we do on relationships. However, if we focus on the value of things that money cannot buy, God will richly reward us. Like the widow, if we give beyond our ability, Christ will supply our needs.

Reconsider the value of the penny as well as the value of your talents, your time, and your treasures. Then give accordingly.